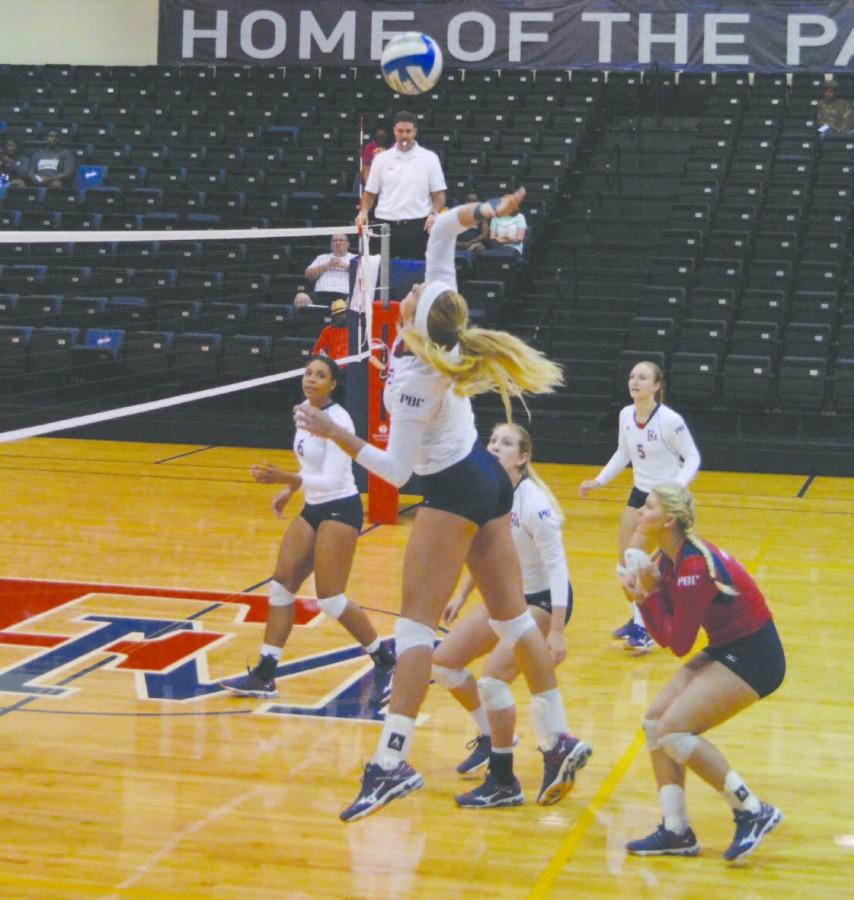 Junior Calie Smith (8) made 13 kills, one ace and two blocks during the Oct. 13 game against the Queens University Royals.

The FMU Patriot’s women’s volleyball team found themselves on the losing end of a match against the Queens University Royals on Oct. 13 in the Smith University Center.

The Patriots had four players with double-digit kills, but Queens won when they emerged from the five set game victorious.

Senior Alexzandra Reed led the Patriots with 14 kills. Freshman Georgia Garrison and her junior teammate Carlie Smith followed Reed with 13 kills each. Garrison dug up 11 balls to complete her second double-double of the week. Smith also played impressively on the defensive side of the ball as she recorded 10 digs to finish with a double-double as well. Shelbi Meek helped lead her team in the dig category finishing with 19 against Queens University. The Patriots played a good team game with freshman Carrie McGinnis and junior Samantha Hinrichs combined for 47 assists.

Queens’ junior libero helped the Royals on the defensive side, recording 32 digs. Sydney Kunz and Annika Jones also put together 47 assists. The Royals smashed 13 aces during the match. The impressive serving was a major factor in the match and helped the Royals defeat the Patriots on the Patriot’s home court.

The first set was controlled by the Patriots. They took the lead early and didn’t surrender to win the first set 25-17. The Royals played a determined second set. It was the true definition of a back and forth match with the lead changing hands five times and neither team extending the gap past four points. The set was knotted up at 23 when the Royals sophomore, who led her team with 17 kills, smashed the final point to catch up to the Patriots and tied the match up at one set a piece.

The third set was similar to the second set. The Patriots jumped out to a great start and gained the lead at 14-6. What looked like a safe lead was spoiled with a big 15-2 run from Queens. The Royals finished the set 25-22 and put themselves in position to end the match in four.

The Patriots however had different plans. Players and the spectators who occupied the Smith University Center became passionate about the team and game when Coach Paul MacDonald was given a yellow card for arguing a call.

The Patriots channeled their energy as they put together a spectacular rally to save themselves from a 24- 22 deficit. They forced a fifth and final set after finishing set four with a 27-25 win. The Patriots and the Royals were locked up at nine points each in the fifth set when the Royals pulled out the 15-12 win in the fifth set, sending home the defeated Patriot fans.

The non-conference loss dropped the Patriots to 11-8 overall.