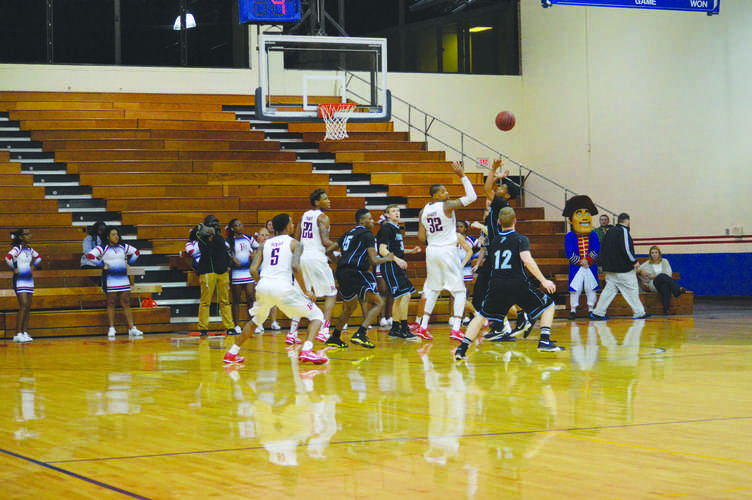 Joshua Lippard (32) blocks a Piedmont player at in the paint during the Nov. 20 game.

The FMU men’s basketball team defeated the Piedmont International University Bruins on Nov. 20, changing their record for the season to 3 -1.

The game started out slow for the Patriots as they watched many of their shots bounce off the rim. The turnovers were plentiful for both teams, but FMU was the rest to take advantage of a sloppy play. The Pats went on a 13-2 run to start the scoring, and they didn’t relinquish the lead.

The Patriots lead increased to 21-5 after junior Filipp Burnashov slam- dunked the basketball.

“It was unorganized at rst, then they started running plays, and now they look good,” freshman biology major Titiana Gore said. “We were bored at the beginning, but then we dunked it.”

The second half was similar. Piedmont put together a decent run, only to turnover the ball and have another fast slam scored against them. Sophomore guard Mike Davis Jr.

contributed to the largest lead the Patriots held, 92-50.

“They are doing a good job controlling the tempo and defending their goal,” senior psychology major Jolethia Robinson said.

The Patriots caused 23 Bruin mistakes and scored 25 points off of turnovers. They also held the Piedmont Bruins to under 30 percent from the eld.

This game was recorded live, and this and other games can be watched at ustream. tv/fmupatriots.

The FMU men’s basketball team will be at home again on Dec. 15.