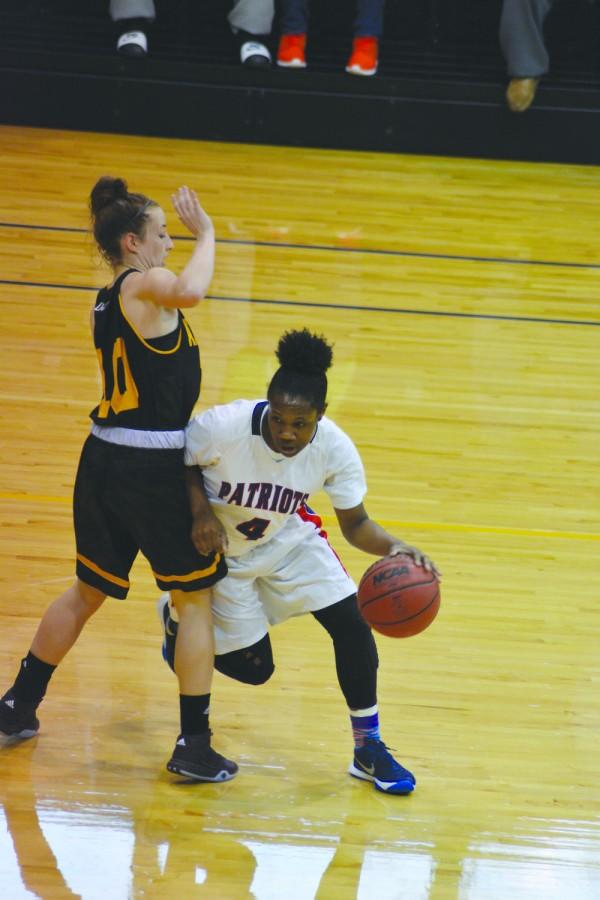 Camille Dash (4) moves the ball up the court towards the basket against Pirate defenders.

FMU women improve their record to 13-2 with a Peach Belt Conference (PBC) win over the Armstrong States Pirates with a 60-47 final score. This win on Jan. 9 moved them to 4-2 in conference and tied them for second place in the (PBC) East Division. Freshman Shaunice Fulmore made her first appearance in the starting lineup for the lady Patriots.

Armstrong State struck first in the game, but the Patriots answered by scoring nine straight points to give themselves a seven point lead. The biggest lead of the game for either team came after a jump shot by Alaysia Watts, extending the Patriot to 31-17. FMU was able to maintain their lead through the first two quarters despite an 11-1 run by Armstrong State to finish the half 32-28.

The Pirates picked up where they left off after the first half, pulling within a point of the lady Patriots with a 7-2 run. The second lead of the game for Armstrong State came in the third quarter with a pair of free throws from Pirate guard Barta Brigitta, giving them a 41-40 lead. FMU regained the lead after Khayani Chandler capitalized on an Armstrong State turnover with a layup.

The start of the fourth quarter began strong for the Patriots as they opened  with a 10-2 start and managed to keep their lead the rest of the game FMU only let Armstrong State score four points the entire fourth quarter to close out the game at 60-47.

FMU shot 31.8 percent for the afternoon form the floor and converted on 14 of 23 free throws. Armstrong State finished shooting 35.3 percent from the floor and was 9-16 from the charity stripe.