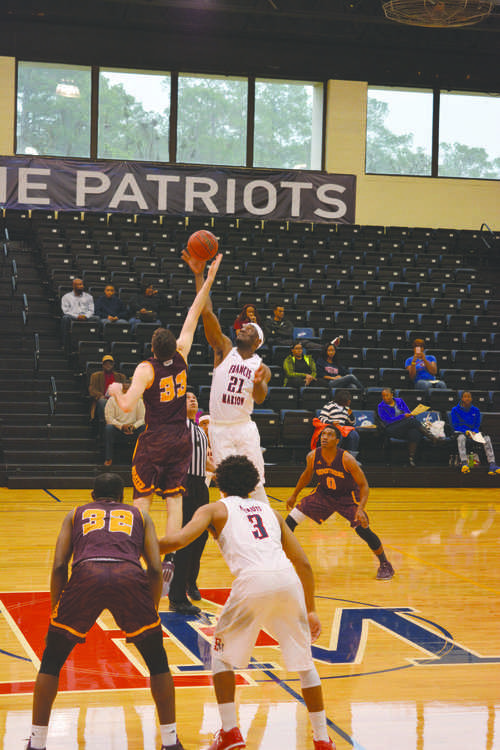 Junior Samson Nnaji (21) jumps for the ball in the tip off of the game against Armstrong State University.

FMU guards Alante Fenner and Detrek Browning scored 20 points each and got the edge over Peach Belt Conference (PBC) opponent Armstrong State in the Saturday Jan. 9 game in the Smith University Center.

Browning, is a sophomore guard and opened the game with a three-point shot, and FMU kept the lead the entire first half. FMU’s largest lead of the half came midway  through the first half after Fenner drove in the paint and converted on a contested layup, giving the Patriots a 29-16 lead. A pair of free throws from FMU closed out the first half with the Patriots on top 36-24.

In the second half of the game, the Armstrong State Pirates slowly started to chip away at the FMU lead. The first lead for the Pirates came late in the second half after a layup by senior forward Ethan Mackey giving them a 53-52 advantage.

The late game battle had FMU and Armstrong State trading bucket for bucket until sophomore guard Mike Davis Jr. gave FMU the lead 62-60, after scoring a bucket inside the point. Armstrong State tied the game on their ensuing possession, knotting the game up at 62-62. A Patriot turnover on defense led to a foul and a trip for Armstrong State to the free throw line with 16 seconds left on the clock.

The Pirates converted the first free throw, but missed the second giving them at 63-62 lead over FMU. The Patriots responded on offense by earning two free throws of their own, with Fenner converting both and giving FMU a 64-63 lead with less than seven sounds remaining in the game.

The biggest play of the game for Francis Marion came on defense as Browning blocked the potential game-winning bucket at the buzzer to seal the victory for the Patriots.