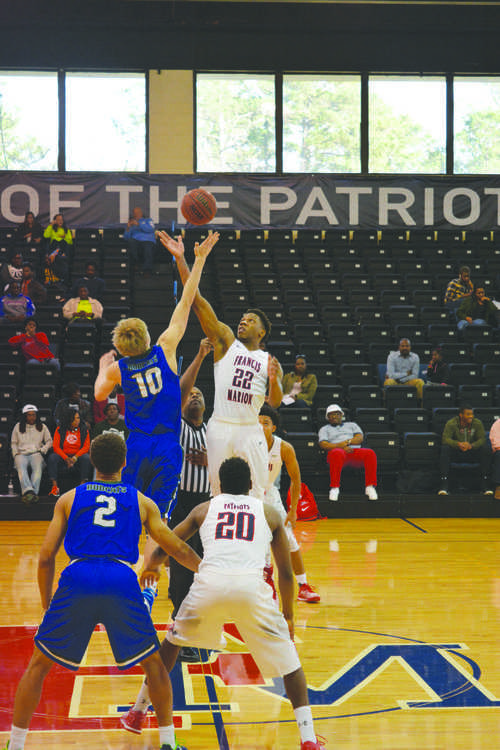 Sophomore Judah Alexander (22) jumps for the ball in the tipoff against the Georgia College Bobcats. The 91-74 win brings the men’s team to a 12-8 overall record.

On Jan. 30 Browning led the Patriots with 23 points, shooting 50 percent from behind the arc, and also added seven rebounds, four assists and tied for a game high three steals.

Sophomore forward Judah Alexander finished the game with 15 points and three dunks that brought fans to their feet.

FMU struggled early in the first half as Georgia College scored the game’s first eight points and led by as many as 10 points midway through the first half. The momentum shifted when FMU converted three straight dunks, one of which featured Alexander driving down the lane, splitting two defenders and throwing it down with two hands while drawing a foul that also sent him to the free throw line.

That dunk pulled the Patriots within four points, and they only trailed 24-28. The Patriots got their first lead after an 8-3 run, which put them up 32-31. The FMU men led for the rest of the game and finished the first half on top 40-34.

Georgia College’s second half strategy was to get back in the game by shooting the ball. They finished the game, attempting 49 threepointers but only connected on 14.

The FMU men continued to attack with balanced scoring from the outside but also dominated the points in the paint 40-18. The closest Georgia College got to catching up with the Patriots was when they pulled within 14 points early in the first half. FMU opened their largest lead of the game with a 23-point advantage around the eight-minute mark and kept at least a 15-point lead over the Bobcats for the rest of the game.