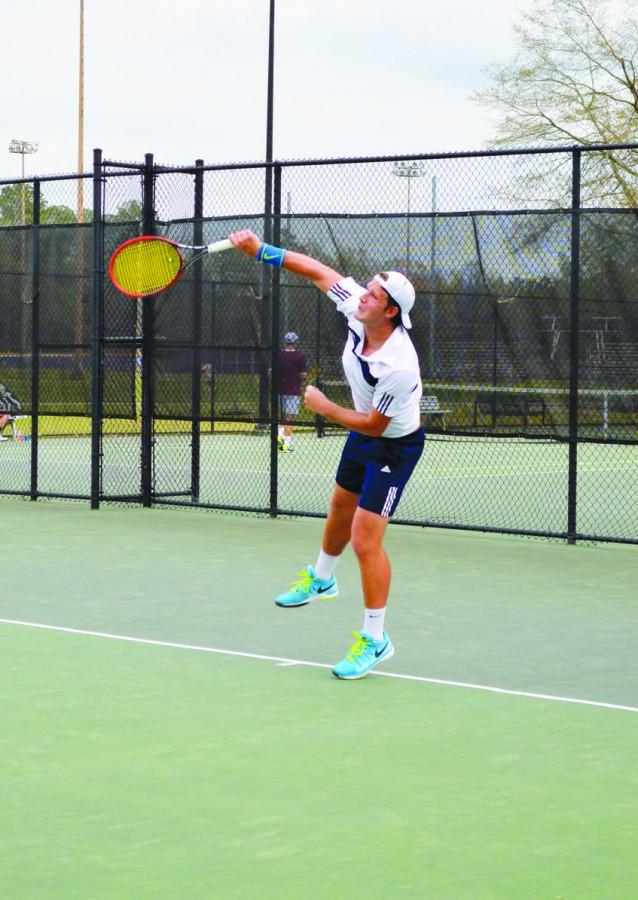 Richie Ashforth has been undefeated in his last eight matches playing for FMU. He was recently named to the PBC all-conference team for the second time.

Ashforth was also named athlete of the week at FMU. Ashforth is a tennis player and said he received the award because he has remained undefeated in his last eight matches.

“I was extremely happy to get athlete of the week because every athlete at FMU has a chance to win it each week,” Ashforth said.

Ashforth began playing tennis when he was fouryears- old. The reason he began playing was because his parents were both talented tennis players with good sportsmanship.

He said his parents are his inspiration and why he continues to play today.

Ashforth said that playing tennis and other sports just came naturally to him. One thing his parents taught was to never give up on a dream once it is set, no matter how hard it may be to achieve.

Ashforth said tennis is something that he has been passionate about for as long as he can remember, and it is a huge part of his life.

“I love tennis because it makes me feel like I’m on another planet, and I just love keeping myself busy around people I care about,” Ashforth said.

Ashforth said it is hard to put his love of tennis into words. Nothing stops him from playing tennis. He plays in the rain and in the cold winter as well as in good weather. He said it is his dedication that makes him the player that he is.

Ashforth said he is on a strict diet and works out twice a day to help him improve at his sport. His advice to aspiring athletes is to make sure they eat properly and always have a positive attitude in whatever they are doing.

He said he feels that being a part of the tennis team has helped make his college career more successful by allowing him to take time out of his academic work to wind down and exercise. Tennis is how he relaxes and stays fresh, he said.

Ashforth said he also enjoys hanging out with the tennis team, playing ping pong, playing video games on his Xbox and working out in his free time. He also makes trips to the beach occasionally to take his mind off of things and avoid burnout.

Ashforth has lived in the U.S. since he was 19-yearsold. He moved for his freshman year of college at FMU, and he has been here for three years now.

He was raised in Durban, South Africa, the second largest populated area in South Africa. Growing up in South Africa was amazing, according to Ashforth. He described Durban as a place with great weather, beautiful countryside and absolutely amazing beaches.

He said he really enjoyed getting to enjoy the city of Durban while he was growing up, but he is also really excited about where he is now in life and where FMU is taking him in his future.

The reason he decided to attend FMU was to play collegiate tennis and get a bachelor’s degree in business. He is also a member of the Student-Athlete Advisory Committee (SAAC) on campus.

Ashforth said he has never been homesick while attending FMU. He attributes this to the southern hospitality he has experienced in South Carolina and said this is one of his favorite aspects of the state. He also loves the weather in the south.

Ashforth said he plans to continue to pursue tennis once he graduates from college.

“I plan to play tennis on the pro tour once I’ve graduated and see where that gets me,” Ashforth said. “I also want to travel the world a bit and enjoy my life while I’m still young.”