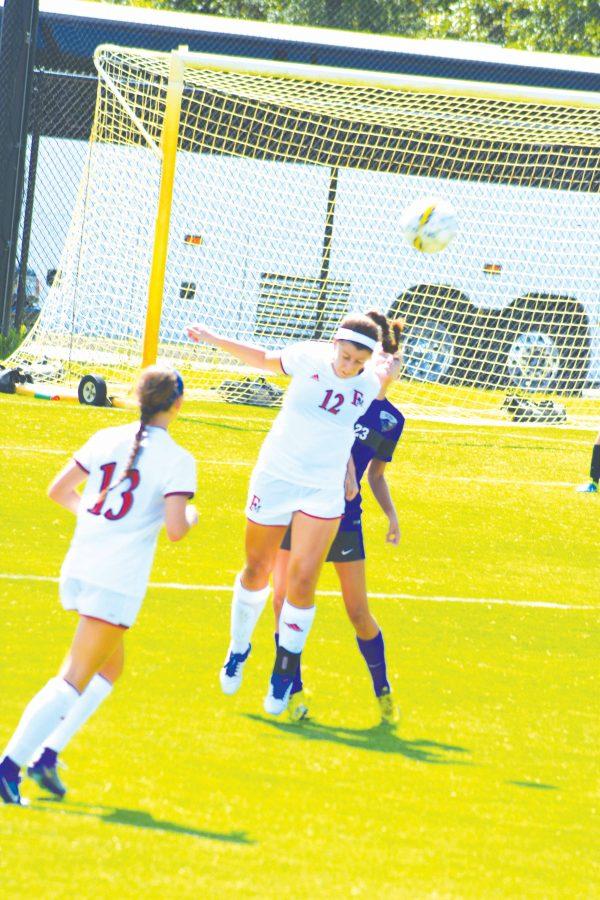 FMU’s freshmen Hannah Poulin (12) and Emily Brommer bounce the ball around in an attempt to keep the ball from Montevallo.

The FMU women’s soccer team marched onto the Hartzler field to play its first Peach Belt Conference (PBC) game in 12 years after returning from the Division I level this season on Saturday, Sept. 17.

The lady Patriots opened their PBC play against the Montevallo Falcons.

FMU senior forward Tori Whigham didn’t wait long to get her team on the board as she capitalized on a mishandled ball by the Montevallo goalkeeper, giving Whigham the empty net from 14 yards out only two minutes after the Falcon goal. Whigham played a part in the second Patriot goal, sliding a pass to junior defenseman Melina Much inside the box. Much took a touch to the right side and let one rip from eight yards out, giving FMU the 2-1 lead with 15 minutes left in the first half.

The Falcons struck right before halftime. The tying goal came on a corner kick from Ally Reeves, and after the ball bounced off many heads, it finally ended up in the back of the net. The goal was credited to Madison Ellis- her first of the season. Montevallo deflated the Patriots and carried the momentum into the halftime.

After halftime, the Falcons took the lead. Gonzales found the back of the net for the Falcons in the 70th minute after she touched in around diving FMU goalie Casey Murakami, giving Montevallo the lead.

The Falcons held the lead for the remainder of the game. Montevallo added some insurance late in the game when FMU surrendered three goals in the final two minutes. Montevallo won in a lopsided victory.

The Sept. 17 game was the fourth game in a row where the Patriots have lost by four goals or more.

Head coach Lindsey Morgan said that the problem for the team all seasons has been consistency. Morgan said she believes that her team took too many plays off against the Falcons. Every goal that the Patriots surrendered on Saturday was the result of a mental error, according to Morgan.

“Seeing the back of the net isn’t our issue,” Morgan said. “Focus is our issue. We have to worry about not losing the moment. They scored in 16 seconds. Every second counts.”

The Patriots will play at home Saturday, Sept. 24 against the University of North Georgia.