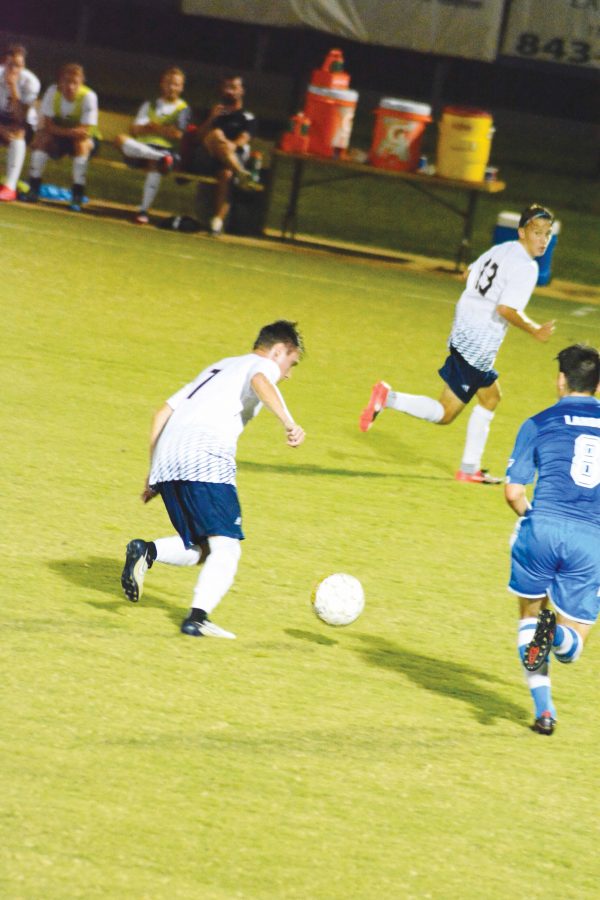 Junior defenseman Gaspard Mianne (7) found the back of the net in a rebound shot after the ball was blocked by the goalie.

The Lander University Bearcats scored three unanswered goals in the second half to beat the FMU Patriots 4-2 on Wednesday, Sept. 28 at Hartzler field.

The scoring started with a Bearcat goal when midfielder Sinclaire Sandy crossed the ball from the right side and found the foot of teammate forward Sam Lofts. Lofts settled the ball and ripped an 11-yard shot that snapped the back of the net to open the game 1-0 in the ninth minute.

The Patriots responded shortly after with a goal of their own after sophomore forward Levin Sandman snuck a through ball to freshman Mathias Hjort. Hjort made a defender miss in the open field and freed himself for a winding shot that bent around the keeper and hugged the inside of the side netting to tie the game at 1-1.

“Both teams started off fast,” junior Tyler Washington said. “It was entertaining. I loved how quickly they moved the ball up and down the field [in the first half].”

Many stoppages plagued the first half of play for injuries and disciplinary chats with the referee but only one yellow card was handed out in the first half. Lander defenseman Lee Northfield received it for tackling the attacking player from behind.

“They started really good,” sophomore tennis player Tarass Thevenaz said. “They had a good opportunity with Gaspard who hit the cross bar. We had the ball a lot and scored so I think they deserve to be where they are at half.”

The Patriots returned strong in the second half of the game as junior defenseman Gaspard Mianne was determined to find the back of the net after smacking the cross bar earlier in the game. He fired a shot that was blocked but Mianne found the rebound and pounded it past the goalkeeper to give the Patriots the lead, with only one minute and three seconds into the second half.

In the 63 minute, the game took a turn when a junior midfielder was called for a foul at the top of the semicircle at the top of the penalty area. A unanimous boo could be heard throughout the stands, letting the referee know that the fans did not agree with the questionable call. The free kick taken by Jamie North led to a Bearcat goal and started the unanswered goals that would eventually lead to the 4-2 final.

“That last goal was all on the referee,” freshman Christian Parnell said. “Lander wouldn’t have been close to scoring if it wasn’t for the bad call.”

After they tied the game it was all Lander.Lofts and Conor Felstead scored the remaining two goals for the Bearcats.