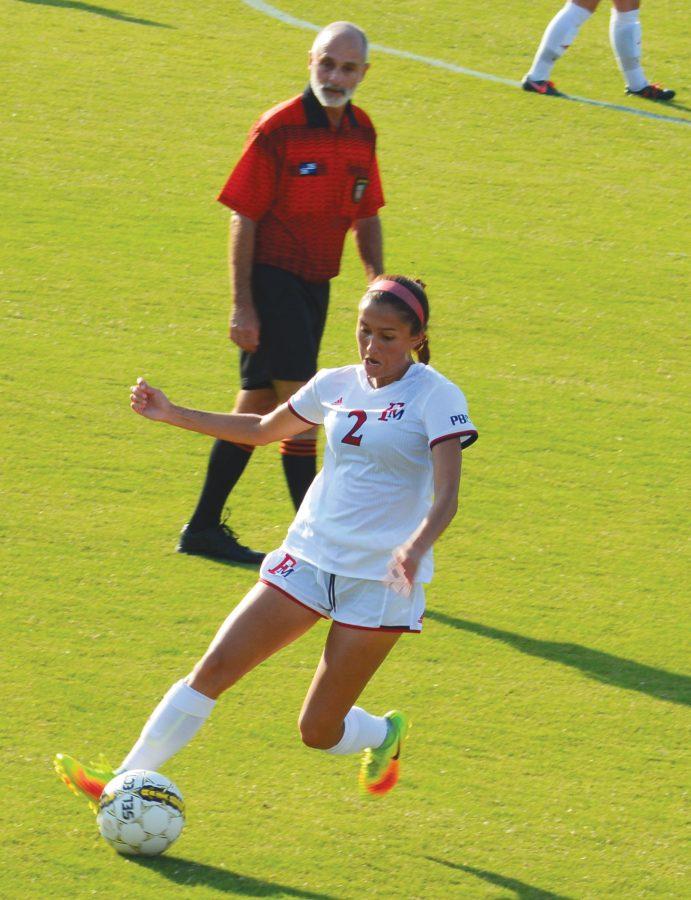 Freshman Avery Towns (2) assists senior Tori Whigham (20) in scoring the only goal made by the lady Patriots against Lander.

The Lander University Bearcats used their strong first half performance to power past the Patriots and earn a Peach Belt Conference win on Sept. 28 at Hartzler field.

“We are struggling a little bit,” Kira Davis, former Patriot player turned spectator, said. “We got to have heart, and we can pull through. The biggest thing is to have heart. If you really love what you do, then they will come back out and put your all into it because at the end of the day whether you win or lose they will know that they fought.”

The girls had the help of the Sea of Red who are the students who show up to one game each season for each sport, but they were unable to will the team to a win.

Levin Sandman, a member of the Sea of Red and the men’s soccer team watched the women’s game before going to warm up.

“It was a tough first half,” Sandman said. “It started very good, but the quick goals and individual mistakes in the back got them. They have a tremendous work rate, and with this tremendous crowd here, hopefully they can improve in the second half.”

The lady Patriots certainly improved in the second half of the game after senior Tori Whigham found the back of the net after a long cross was sent in from freshman Avery Towns. It was the lone goal for the Patriots and the only bright spot throughout the game.

Morgan said the team made simple mistakes and didn’t know how to get the ball back under pressure.

“If we would’ve stayed focused we would’ve won,” Morgan said. “We desperately need a win, but no one is given things. We’ve got to earn it.”