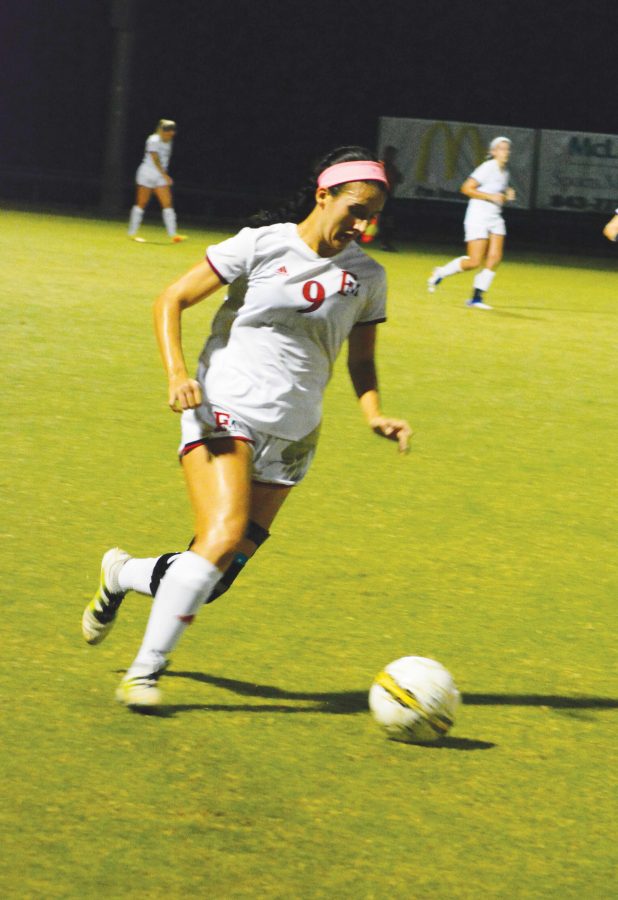 Defensive player Mia Much (9) runs the ball down the field during the Oct. 19 game against the Georgia College Bobcats.

The struggles continued for the FMU women’s soccer team as they were on the losing end of a 7-0 rout by the Georgia College Bobcats on Hartzler field on Oct. 19.

The Patriots found themselves down early when sophomore Anya Mancinelli was in perfect position to find the header of a corner kick three minutes into the game. The Bobcats continued to rain shots on junior goalkeeper Casey Murakami, tallying 15 in the first half. Georgia College found the back of the net again on a play that led to junior Amanda Bartholomew blasting a volley from 13 yards out past Murakami to give the Bobcats a two-goal lead going into the half.

Mark Mancinelli, a Georgia College spectator and father of player Anya Mancinelli, described The Bobcats’ performance at halftime. He answered in one word, “Solid.”

“They’ve been aggressive to the ball and have been on attack the whole time,” Mark said. “They’ve just played solid.”

There were loyal fans in attendance for the Patriots. One of whom was business management major Darnay Wilson. Wilson praised Murakami at halftime. “Our goalie is coming in clutch,” Wilson said. “She’s saved us a couple times. It could’ve been much worse. We just got to keep fighting to get one.”

After Murakami dug the ball out of the back of the net for the sixth time, she gathered her team at the top of the box and began an attempt to fire them up.

“Keep your head up,” Murakami screamed loud enough for not only her teammates to hear but everyone in attendance as well.

The Patriots were trailing by six goals late in the game and began to threaten the Bobcats with two shots that ripped off the post. FMU also saw a rebound off the keeper and bounce in front of the net as bodies flew to try to get it in the back of the net. The shot was sent well over the crossbar in the final three minutes.

“It’s something we’ve been preaching the whole entire year,” head coach Lindsey Morgan said. “Our character has to shine through at the end of the day. The girls are aware that it’s been a tough season, but when you got girls busting their butts until the final whistle, that just gives me more confidence for the future and the leadership that is possible.”

Morgan also had praise for her goal keeper after the game.

“Casey is a very hard worker,” Morgan said. “When we give up so many shots, you got to have a goalie that pretty much stands on her head at the end of the day. We are just proud of her for continuing to battle and fight.”

The Patriots were dominated in all statistical categories, giving up 30 shots and seven corner kicks. FMU only recorded 12 shots and had only two corners. The Patriots fell to 0-14 this season and are last in the Peach Belt Conference.