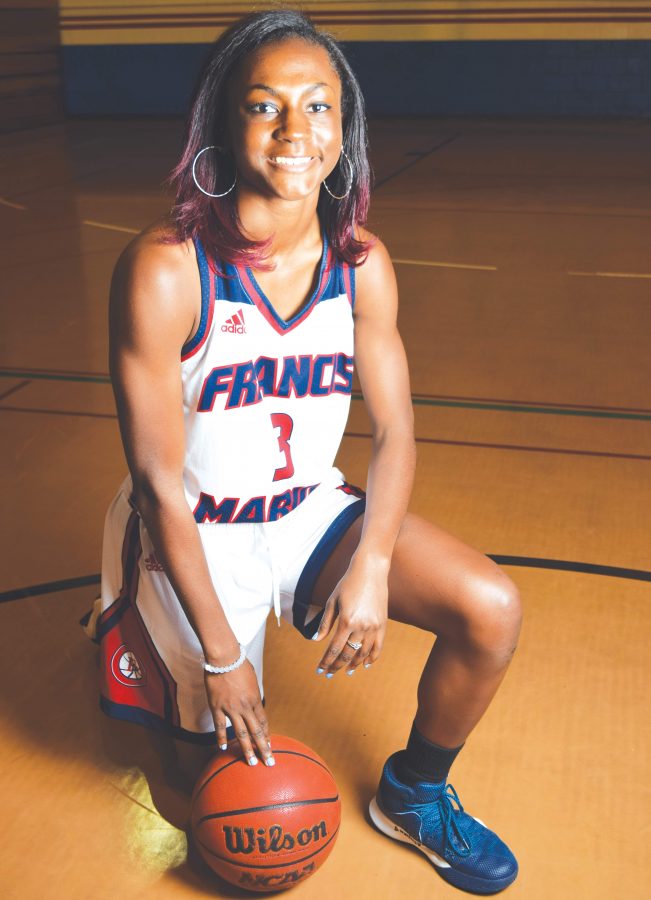 Briana Burgins has been playing basketball since she was 4-years-old, when her parents were her coaches on her first team.

She’s earned the title of everything from the NCAA Division II Most Outstanding Player of the Southeast Regional to an FMU Diplomat and a member of the Omicron Delta Kappa honor society. She is a biology major and a forward on the FMU women’s basketball team. While her coach and teammates know her as “Little Draymond,” the rest of us know her as Briana Burgins.

Burgins began playing basketball when she was 4-years-old in Kernersville, NC at the YMCA under the coaching guidance of her parents. Her mother knew instantly from the way Burgins carried herself on the court that she was going to be a basketball star.

“My mom tells me stories of how she could see the light in my eyes,” Burgins said. “She knew I was going to be doing this for a while.”

Burgins has always been an athlete and was a standout volleyball player in high school, as well as a basketball player. She received more offers to play college sports because of her talent on the volleyball court rather than basketball. Burgins said the decision to come to FMU wasn’t an easy choice, but that it was the best choice for her.

“This place felt like home,” Burgins said. “If I had to be at a school away from home, this was one of the schools that I really liked when I came on my visit,” Burgins said.

For Burgins, it’s not only about the roar of the home crowd, but the silence of the away crowd. She said that there is nothing better than proving a crowd wrong when they are loudly cheering on their team, and she hits the shot that makes the gym quieter than a library.

Burgins can be found around campus playing ball in the gym, playing UNO with friends or sitting in her room doing her favorite leisure activity—reading. Burgins said she loves to go out with her friends and her teammates but believes that finding a balance between basketball, academic work and recreational time is important. She has a wall of motivational quotes and bible verses on the back of her closet door, just in case she forgets how to keep the balance.

“She’s always a pleasure to be around,” teammate Lauryn Bush said. “She always has something positive to say.”

When she was little, Burgins said she often imagined playing UNO and play an entire game by herself when she was unable to find people to play with. She has one brother and says that her parents have been her biggest motivators. Her mom comes to as many of her games as possible, and when she can’t come to a game, she watches her daughter play on her internet.

“She was there when I first picked up a basketball, and she’s been there for every game since,” Burgins said.