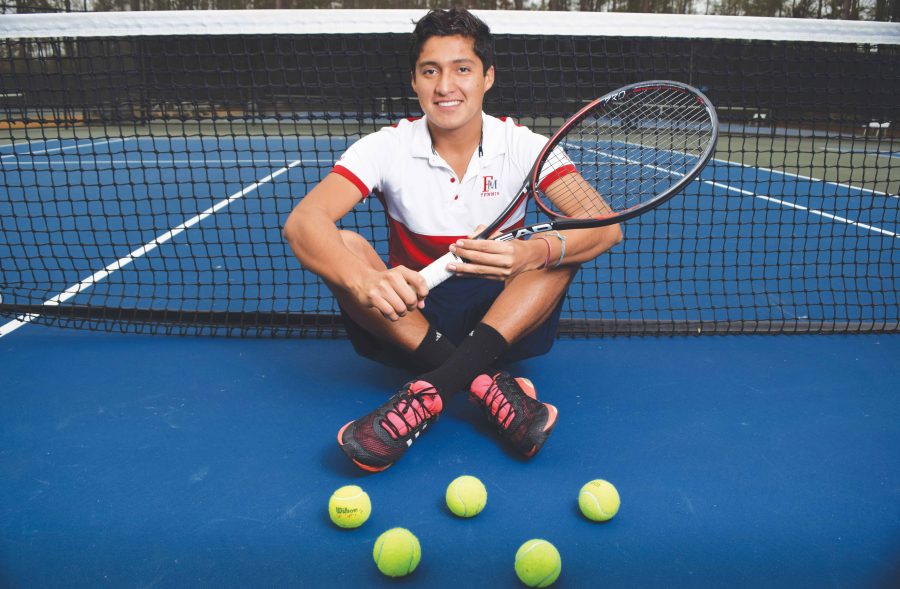 Tennis Player Mauricio Guerrero always wears a bracelet to motivate him to give 100 percent in everything he does, including playing tennis, practicing music and learning a new language.

When pressure to succeed quenched the thrill of competition, freshman business major Mauricio Guerrero put down his racquet until he knew he could again play purely for himself and the love of tennis.

Guerrero began playing tennis in Mexico City at the age of 11 after seeing his father in action on the court. He said he fell in love with the sport when he played in his first tournament.

“I started to train more, and my love for the sport grew more until one day I knew I wanted to do this forever,” Guerrero said. “When I was 15, I made a decision to try to become a professional tennis player. Everything changed.”

Guerrero traveled to tournaments in Mexico, Central America, the U.S. and Cuba. Because he usually traveled by himself, Guerrero said he quickly matured.

“I learned how to face things on my own,” Guerrero said. “I was my player, my coach, my manager and my mom and dad. When you’re on the court, you’re responsible for your actions, but I was responsible for everything.”

Guerrero said the lessons learned on the road were worth the sacrifices.

“I lost a normal teenager’s life, but I have lived things that others have not, like traveling,” Guerrero said. “I started to change my perspective on some things. I think tennis has been my teacher in my life. It’s my passion, but it’s also my teacher.”

Guerrero said that he thought his last year of play in 18 and under tournaments would propel him into a professional tennis career. However, his momentum reversed. He became increasingly frustrated with himself when he lost three international tournaments in Mexico.

“I was depressed and angry with myself,” Guerrero said. “I didn’t enjoy the game. The love and passion that I had was gone.”

Willing to set aside his dreams if he could no longer win or enjoy tennis, Guerrero decided to take a one-month break from the game.

However, Guerrero couldn’t even go a month without a racquet. His passion for tennis came back. Guerrero said it was time to go back to the court and try one more time, but there would be conditions.

“I made an agreement with myself that I would play for myself, not for results or other people,” Guerrero said. “I was playing because I love tennis, and I love the competition. It was for my internal reasons. I got freedom from that. Before, I was always playing with pressure: you need to win, you need the ranking.”

Guerrero’s enjoyment for the game came back and so did his confidence.

Guerrero lost in the international tournament, but by playing in the tournament, he achieved one of his personal goals.

“I watched the Abierto tournament since I was 12,” Guerrero said. “It was my dream to play in it. When I was in the international tournament, I knew that this was what I wanted to do. I went from nothing to being one of the most important players in Mexico.”

Knowing that he wanted to go to college and play tennis, Guerrero’s coach helped him network with coaches in the U.S. Guerrero now sports an FMU Patriots uniform and said he is excited about the upcoming season.

“The tennis team here is so good,” Guerrero said. “As an individual, I want to be my best possible player for the team to help the team to succeed.”

In addition to being a full-time student and playing on the tennis team, Guerrero also plays guitar and sings.