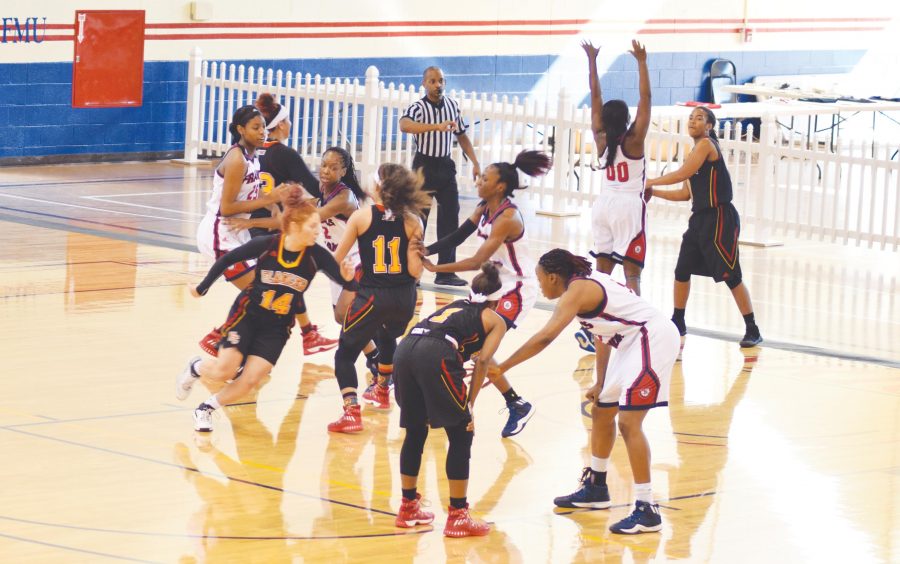 The women’s basketball team attempts to prevent Flagler from maintaining possession of the ball.

Sophomore Shaunice Fulmore and junior Briana Burgins combined for 44 points and FMU posted a season-high point total in the opening half as the Patriots cruised to an 87-60 Homecoming victory over Flagler College on Feb. 11 in Peach Belt Conference women’s basketball action.

The Patriots upped their record to 14-11 with their fifth straight win and seventh in the last eight games. They also moved into sole possession of third place in the PBC’s East Division standings with a 9-7 mark.

Fulmore connected on 11-of-15 field goal attempts en route to a game-high 23 points, and Burgins was 10-of-16 from the floor and scored 21 points. Junior guard Khai Chandler added 16 points and surpassed the 900-point plateau for her career, and junior guard Keanua Williams came off the bench to contribute 10 points.

A 15-0 run by FMU midway through the first quarter erased an early threepoint Saints’ lead and put the Patriots ahead for good at 19-7. Francis Marion led 25-15 at the end of the first period as Burgin tallied nine of her points.

An 11-0 spurt by the Patriots early in the second period swelled the margin to 40-19. Altogether, Francis Marion shot 54.5 percent from the floor and committed only two turnovers during the first 20 minutes as the Patriots assumed a 52-26 halftime advantage.

The Saints crept to within 18 points with 3:08 left in the third quarter, but the Patriots held a 66-45 lead when the horn sounded to end the period. Flagler again cut the deficit to under 20 points at 70-51 midway through the fourth period. FMU responded with a 14-5 spurt to seal the game and allow the Homecoming crowd of 1,194 to celebrate.

For the game, Francis Marion shot a season-high 50.6 percent, including 4-of-11 from beyond the three-point arc, and the Patriots drained 5-of-7 free throws. The Patriot defense held Flagler to 32.8 percent shooting, including 5-of-14 from three-point territory. The Saints were 17-of-22 at the foul line.

While committing a season-low eight turnovers, Francis Marion forced 20 Saints’ miscues that were converted into 29 points.

Prior to the start of Saturday’s tilt, FMU recognized the two Patriot squads (1997-98 and 2015- 16) that reached the NCAA Elite Eight with a plaque unveiling in the Smith University Center.