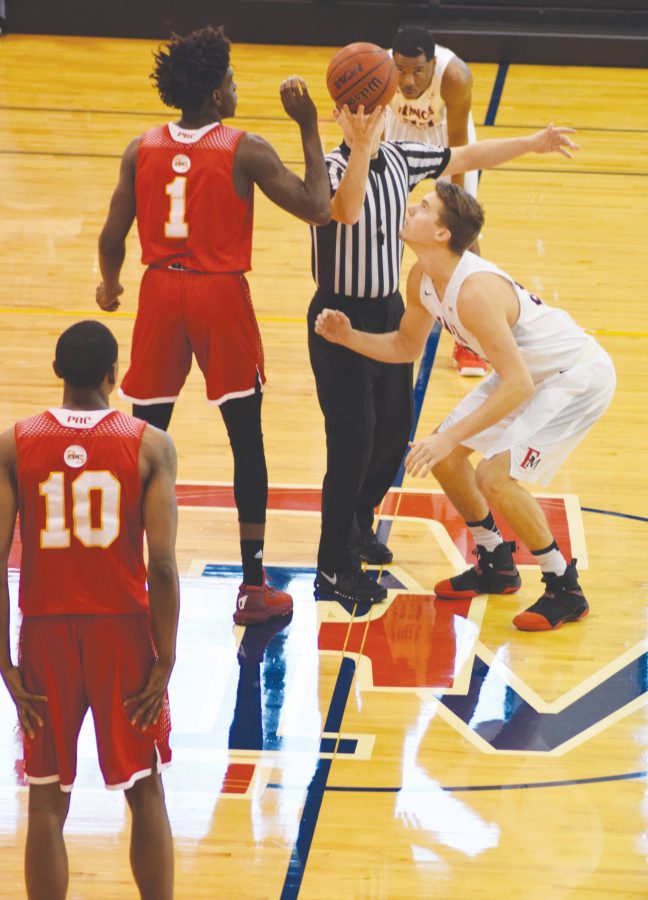 Junior Daniel Bridges (32) prepares for the tipoff to begin the game against Flagler.

Trailing by one point with 3:30 remaining, FMU closed the Feb. 11 Homecoming contest with Flagler College with a 16-2 run to grab a 72-59 win in Peach Belt Conference men’s basketball action.

For the second game in a row, sophomore guard Brandon Parker led the Patriots in points, this time with 18 points, 15 of which came in the final nine minutes. Junior guard Detrek Browning scored 14 points and moved to within four points of sixth place on the FMU career scoring list.

Sophomore forward Jeffercy Jean was the lone Saints player in double figures as he scored a game-high 21 points on 8-of-11 shooting. Flagler fell to 9-14 and 3-13.

FMU led by as many as seven points on two occasions in the opening half, the latter time at 22-15. However, FMU connected on only one field goal during the final 9:40 and Flagler rallied to take a 28-26 halftime lead.

Five consecutive points by the Saints to start the second stanza upped the margin to 33-26. The advantage would grow to nine points at 39-30, and with 6:57 left, FMU still trailed 53-46. Eight straight points by Parker over the next 1:10 gave the Patriots their first lead of the half at 54-53.

A dunk by Chris Williams put Flagler up 57- 56 with 4:42 on the clock, but FMU answered with five straight points to lead 61-57. After a pair of free throws by Jean cut the margin to 61- 59, FMU scored the final 11 points, capped by a fast break dunk by Alexander that electrified the Homecoming crowd of 1,319.

FMU shot 62.1 percent in the second half to aide in the rally. The Patriots held Flagler to 0-of-7 shooting during the final 4:30.