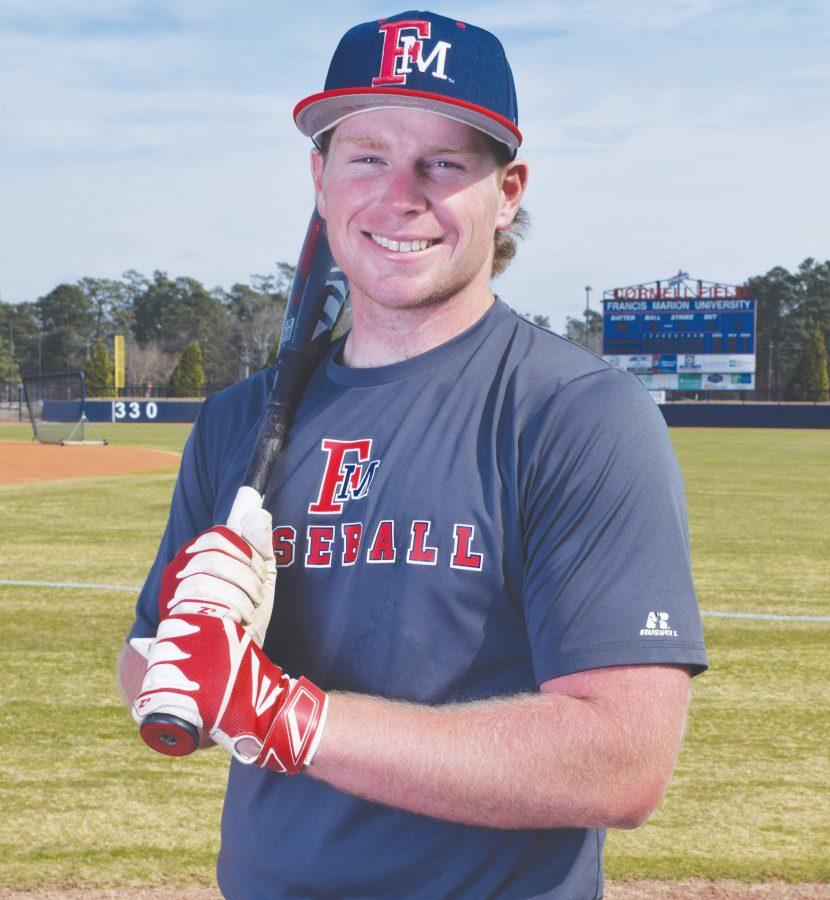 Tee Dubose plays first base for FMU after transferring from USC Sumter in the fall semester of 2016.

The Patriot’s new first baseman, Tee Dubose, is passionate about working on a team to see goals achieved, but he wants his legacy to be about more than scoring runs and fielding balls.

Dubose is a junior finance major. While he plans to get his master’s degree and work for a large business, he also wants to be involved in a church as a youth pastor.

“I feel like I could influence a lot of people if I were a youth pastor,” Dubose said. “I don’t want to just go to work in a cubicle. That doesn’t make a difference in the world.”

Dubose said that having a belief in God gives him hope every day, and he wants to share that hope with others.

On the baseball field, Dubose strives to empower his teammates and understands how important collaboration is to success. His goal for this year at FMU is to see his team make the Peach Belt Conference tournament.

“My biggest goal is to do whatever I can to help my team get there,” Dubose said. “I hope to be as supportive to my teammates as best I can and make everybody feel like they’re at a good place. Hopefully, chemistry will play a big part in our team and our success.”

Dubose said that with a 30-member team, everyone gets close quickly. He said that building friendships and meeting new people is one of his favorite parts about playing baseball.

“I’ve met more people through baseball than anything else,” Dubose said. “I love being happy and being with all of my friends. Baseball is a fun way to do that.”

Dubose began playing baseball at age 4 and has consistently been involved in the sport since his dad first took him out to the park to hit balls.

“In Legion Baseball, they pride themselves on being very patriotic,” Dubose said. “That kind of taught me how to be respectful to the flag, and now I’m a Patriot.”

Dubose then began playing for Sumter High School. The team won the state championship during his freshman and senior year. He said that his time at Sumter High School prepared him to play baseball at the collegiate level.

“Everyone has always been a winner from Sumter in the baseball category,” Dubose said. “I know my coaches expected us to do good every year, and they teach you how to work hard and be great. It was an easy transition going from their baseball practices to USC Sumter baseball practices.”

During Dubose’s first year at USC Sumter, the team made it to the junior college world series, a first for the program.

After his two years of eligibility were over at USC Sumter, Dubose received a scholarship from FMU and transferred. He said that leaving his family and friends was a difficult transition, but he is thankful that they are only an hour away. Dubose said that he is close with his family, and his parents often make the drive to Florence to see him play.

When not playing baseball, Dubose enjoys playing pickup sports with friends. He is also a dedicated student. “I like to make good grades,” Dubose said.

“I had a 4.0 GPA last semester. I need to take pride in getting a good education. I try to use my time to better myself. I’d rather be studying and making good grades than doing stupid stuff.”