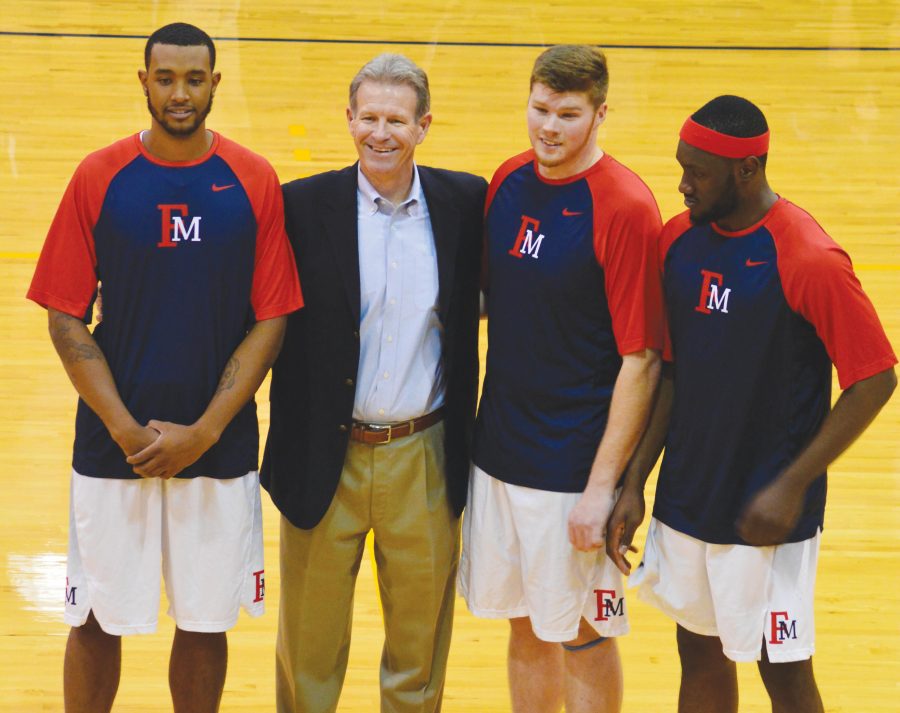 Both the FMU men’s and women’s basketball teams ended senior night in victory as they faced the Lander Bearcats on Feb. 15.

With multiple turnovers and fast breaks, the women’s basketball game was fast-paced. In total the Lady Bearcats forced 10 steals, and the Lady Patriots forced five.

Sophomore middle-level education major Chevy Ellington said he was proud of how the women’s team didn’t lose focus during a back-and-forth scoring game.

“I think they played well,” Ellington said. “I’m really happy for Coach Porter and her staff. They had a really tough start, but they turned it around. She runs a first-class program. I’m proud of them.”

The women’s FMU players and coaches as well as some fans wore pink T-shirts to support the Play 4 Kay project, an organization that funds women’s breast cancer research.

The men’s game, like the women’s consisted of back-and-forth baskets during the first half. Lander led 38 to 35 at the half.

Sophomore business management major Jayson Daniels said he was concerned during the first half when the Patriots were behind, but he never lost hope in the team.

“I think we did really well,” Daniels said. “We started off slow, but during the second half we played at our own pace. We moved the ball well and got open shots which equaled an 11-point victory.”

During the game, guard Detrek Browning hit a three-point shot that made his total points scoring as a Patriot tally 1,570, putting him in fifth place all-time scorer at FMU. Browning continued to score, making his point total for the night 24.

Before the women’s and men’s games began, FMU recognized each teams’ seniors. The women’s team has one senior, guard TeTe Flowers. The men’s team has three seniors: forward Samson Nnaji, center Nigel Holley and forward Kenneth Jackson. While each player’s accolades were announced, their coaches and teammates congratulated them and posed for pictures with them.

Senior student athletes from all sports were recognized during halftime of the men’s basketball game. Each athlete chose a faculty member who was influential to them during their school career to stand with them on the court as their name was called.

The Dimensions of Diversity Dance Team performed during both basketball games and at half time of the women’s game.