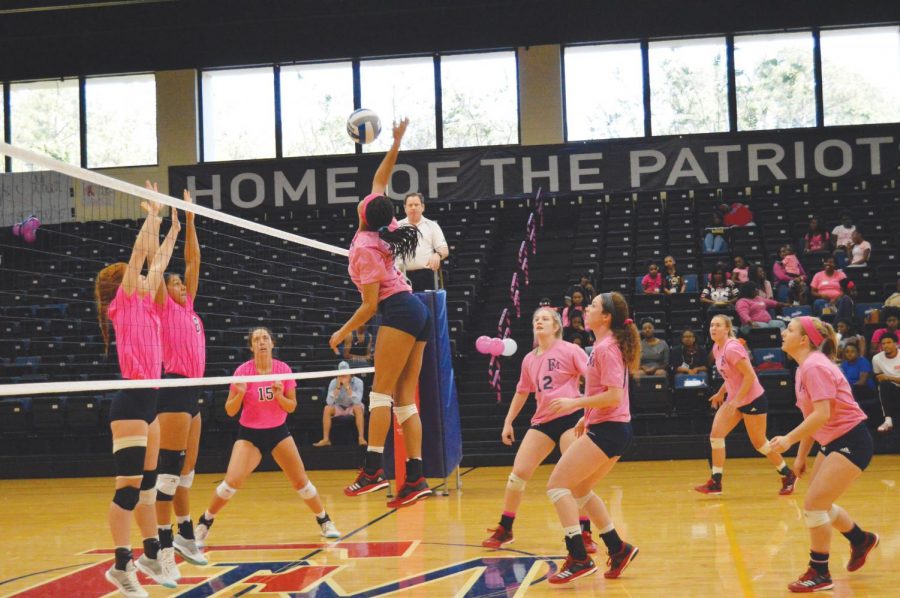 Cortney Bowen spikes the ball against the Augusta University Jaguars. Bowen is a first-year player at FMU.

The FMU Patriot volleyball team was defeated by the Augusta University Jaguars on Oct. 21 in the Smith University Center (UC).

The match was the team’s “Serve Pink” game during Breast Cancer Awareness Month, which aims to raise money and awareness for the disease. Both teams donned pink jerseys, and most of the crowd was dressed in pink attire.

Patriot team members sold pink rubber bracelets throughout the week and pink breast cancer awareness T-shirts at the game to raise money for the cause.

The donations supported the nonprofit organization Little Houses of Hope, which, according to its mission statement, provides free vacations to families fighting breast cancer.

The Jaguars won all three sets, and the largest winning point margin was six points in the third set.

FMU was unable to beat the hitting percentage put forth by Augusta. Augusta hit .311 and FMU hit .162. While Augusta proved strong in the opening, never trailing and winning 25-20, the second set saw more competition with 12 ties and three lead changes. Augusta also won that set 25-21. The third set was ultimately won by Augusta 25-19.

Freshman setter Tori Carpenter and junior setter Carrie McGinnis were also able to contribute to FMU’s performance, with Carpenter giving 17 assists and McGinnis giving 16. McGinnis also added to the team’s individual rankings, coming in at No. 4 in assists per set.

The Patriots were able to out-block the Jaguars 9-3 but came up just short in digs 49-42. The Patriots’ three aces were outmatched by the six posted by the Jaguars.

FMU’s current record is 7-14 overall, with two wins and six losses in the PBC. The Patriots are placed sixth overall in the PBC and have five games left in regular season play.

FMU’s next conference match is against Georgia College on Oct. 28 at 5 p.m.