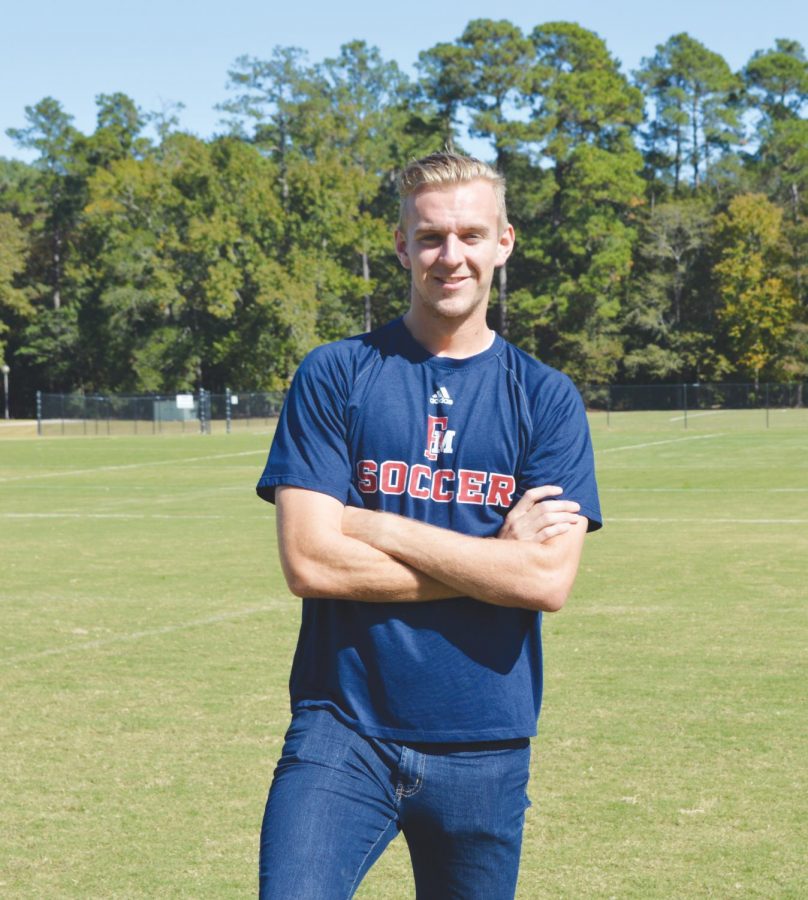 Oliver Drakenhammer adjusts to life in the U.S. by striving to be the best he can be on the soccer field and the classroom.

For Oliver Drakenhammar, coming to a new country where he did not know anyone was both challenging and frightening; however, he has found his home on the field.

At first, the most difficult thing about coming to the U.S. for Drakenhammar was adapting to speaking English. English is his second language, but with practice and help from his peers, he has grown accustomed to it, he said.

Drakenhammar began playing soccer at the age of 5. He is a native of Partille, Sweden, and soccer has always been a passion of his.

On the field, he is primarily a striker but occasionally plays right wing.

He has scored two goals this season in which both were scored with his head rather than his feet.

Drakenhammar’s height is an asset to the team and to him as an individual player.

“I’m strong with the ball,” Drakenhammar said. “There are not a lot of people who can take the ball from me.”

This is beneficial to a striker attempting to get down the field to score.

To decide which university he would attend, Drakenhammar participated in a showcase in Sweden. During these showcases, university prospects are teamed up to play two games against each other. After the games, the players and their agents create a highlight video that is uploaded to YouTube and then sent to different universities. Once the coaches review the highlight material they receive, they make their decisions and contact the agent of the player they want, Drakenhammar said.

Student athletes are expected to attend all practices and games throughout the week but also have morning workouts they must complete.

“We practice five times a week and have two games per week, so sometimes you might want to put more work into your school work than you have time for,” Drakenhammar said. “Some away trips are as far as Florida, which is seven hours, so everyone brings their school materials to study on the bus.”

Drakenhammar said the biggest differences between playing soccer in Sweden and playing in the U.S. are the temperature difference and the coaching style.

“The coaches here are always pushing you and trying to make you better than you already are all the time,” Drakenhammar said. “I wasn’t used to that in Sweden. In Sweden I could make more mistakes and they would not notice as much.”

Throughout his time at FMU, support from his family has been his No. 1 driving force. Although there is a 6-hour time difference between the two countries, his mother and brother try to watch both Patriots games every week.

“My dad calls me before every game to make sure everything is fine and that I am pumped up for the game,” Drakenhammar said.

After graduation, Drakenhammar plans to return to Sweden to work on his Master’s degree in marketing.