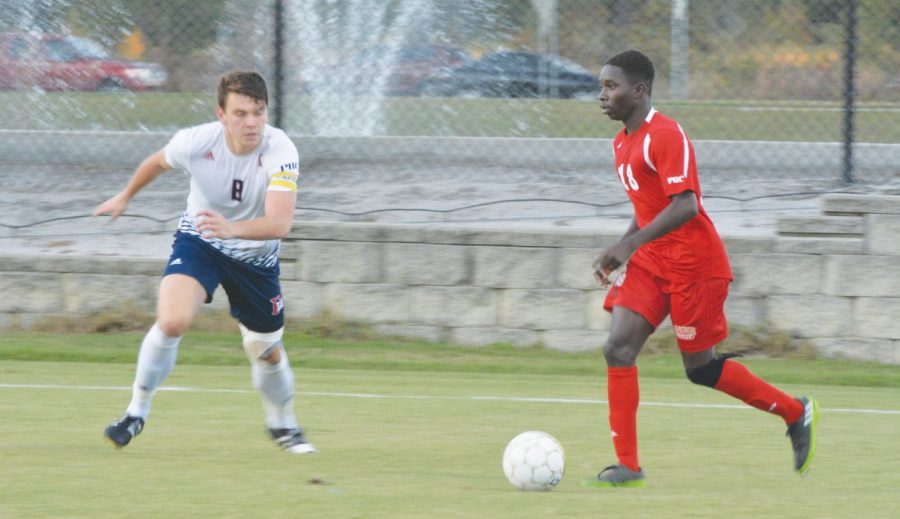 Senior Harrison Smith defends a Flagler College player during his last game for the patriots.

The FMU men’s soccer team lost to the Flagler College Saints in a 2-1 match during its last game of the 2017 season on Wednesday, Oct. 25.

The defeat forces the Patriots to finish the season with a 6-9 record, making them unable to qualify for the Peach Belt Conference tournament.

The Patriots had several attacking opportunities and the majority of possession for most of the first half. Junior forward Levin Sandmann opened the scoring in the 25th minute when he latched on to sophomore Damien Tergella’s low cross to the top of the 18-yard box. Sandmann swiftly beat the last Flagler College defender before sending the ball into the top left corner of the net.

For the remainder of the first half, the Patriots and Saints had opportunities to goal. Senior Patriot defender Jevon Williams had a chance from the right side of the 18-yard box with a strong strike that was well-saved by Saints’ goalkeeper Iwan Roberts.

Flagler College forward Oscar Davidsson helped the Saints tie the game up early in the second half. Davidsson sent the ball into the top of the Patriots’ net to tie the game at 1-1 with 31 minutes left in the game.

The game remained evenly-matched following the Saints’ goal until sophomore Patriot defender Matthew Bainbridge received his second yellow card and a subsequent red card for a reckless sliding challenge in the 77th minute.

With the Patriots down to 10 men for the last 13 minutes of regulation, the Saints had their fair share of chances to end the game. However, the Patriot lineup held on to force the game into overtime.

The Patriots fell behind, ultimately costing them the match as a swift counter attacking move from the Saints ended the contest in the 93rd minute when Davidsson registered his second goal of the game.

Junior forward Levin Sandmann finishes the season as the team leader for goals with 10 goals, while junior Gaspard Mianne and sophomore Jordan Dechere both end the season on top of the team assists chart with five each.