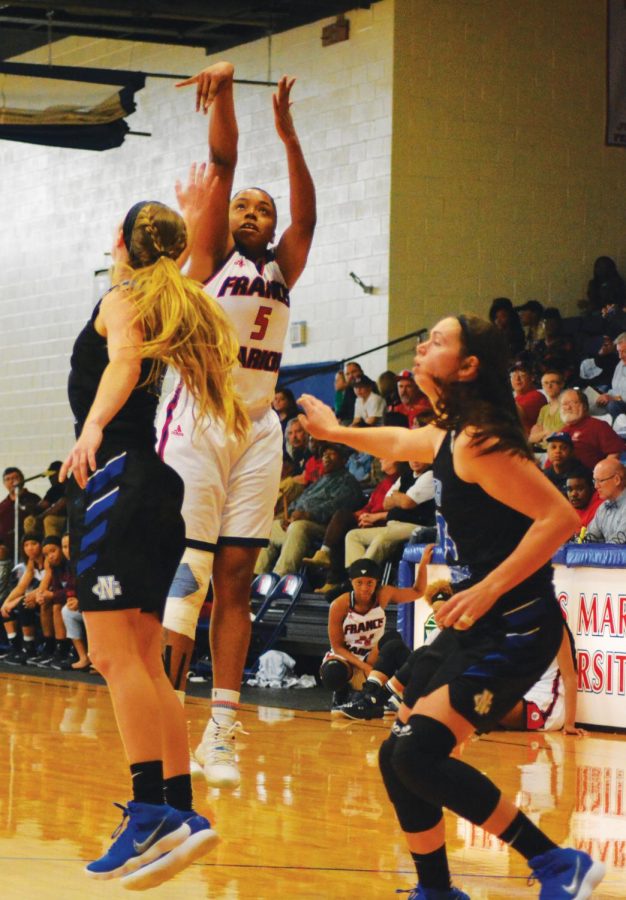 Keauna Williams, junior, shoots and scores against the lady Nighthawks from University of North Georgia.

A spirited fight from the Lady Patriots wasn’t enough to hold off the North Georgia Nighthawks as they took the game 63-53.

It was a slow start for the Patriots who failed to convert any of their opening eight attempts, however, they rebounded this to ensure the game was level at 10-10 at the end of the first quarter.

FMU opened the second quarter significantly better than the first with a layup from Shaunice Fulmore taking the Patriots to a 14-10 lead. It remained a tightly locked quarter until a late 8-2 run by the Nighthawks, which gave them a halftime lead of 30-25.

The Patriots struggled to come back into the game following the half, with the Nighthawks continuing to drain shots.

The conference-leading Nighthawks held on well at the end, converting the last four points of the game to ensure the victory would be theirs.

Fulmore led the Patriots in scoring with 19 points and seven rebounds for the game. Fulmore brought her total career points to 1,254 points, which ties her at 17th place on the all-time scoring list.

The Lady Patriots were supported by a packed crowd as part of the annual Homecoming festivities. Tailgating took place behind the gymnasium, allowing fans to enter the game from an outside door to show their support.

The Patriots will be looking to snap a three-game losing streak as they lineup to play their final five games, which are all conference games. The Patriots are currently sixth in the conference with a 10-7 conference record and a 13-9 overall record.

The Lady Patriots will be back in action at the Smith University Center for their next two games against Young Harris College and Augusta University.