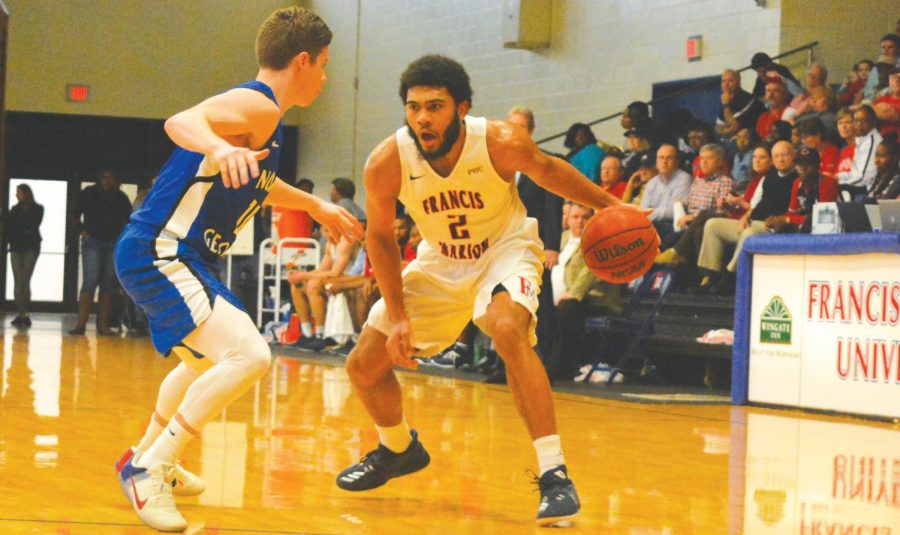 Detrek Browning dribbles the ball down the court during the Feb. 10 game against University of North Georgia.

FMU men’s basketball continued their season with a 90-54 victory over the North Georgia Nighthawks on Homecoming weekend.

Junior forward Victor Hunt put in an inspired performance off the bench leading the Patriots in scoring with 17 points. Five different Patriots went on to register double digits in points.

The Patriots came out of the gates very quickly, racing to a 15-2 lead from tip off. It wasn’t quite the same for the Nighthawks who missed nine of their first 10 field goal attempts.

Much like at the beginning of the game, the Patriots came out of the half with a 10-4 run to up their advantage to 30 points. The Nighthawks began to show some life as they trimmed the Patriot advantage to 20 points just over halfway through the second half.

However, any sign of a resurgence by the Nighthawks was quickly put to bed by the Patriots who ended the game with a 20-4 run to ensure the 90-54 victory.

The victory moves the Patriots into a tie for third place in the Peach Belt Conference standings as the postseason grows closer.

Senior guard Detrek Browning continued to be an ever-present force on the stat sheet, as he has been for most of the year, registering 15 points and six rebounds. Junior forward Brandon Parker also registered 13 points and a team-high seven rebounds on the day.

The 36-point margin of victory in the rout over the Nighthawks was the largest win for FMU in conference play for 15 seasons.