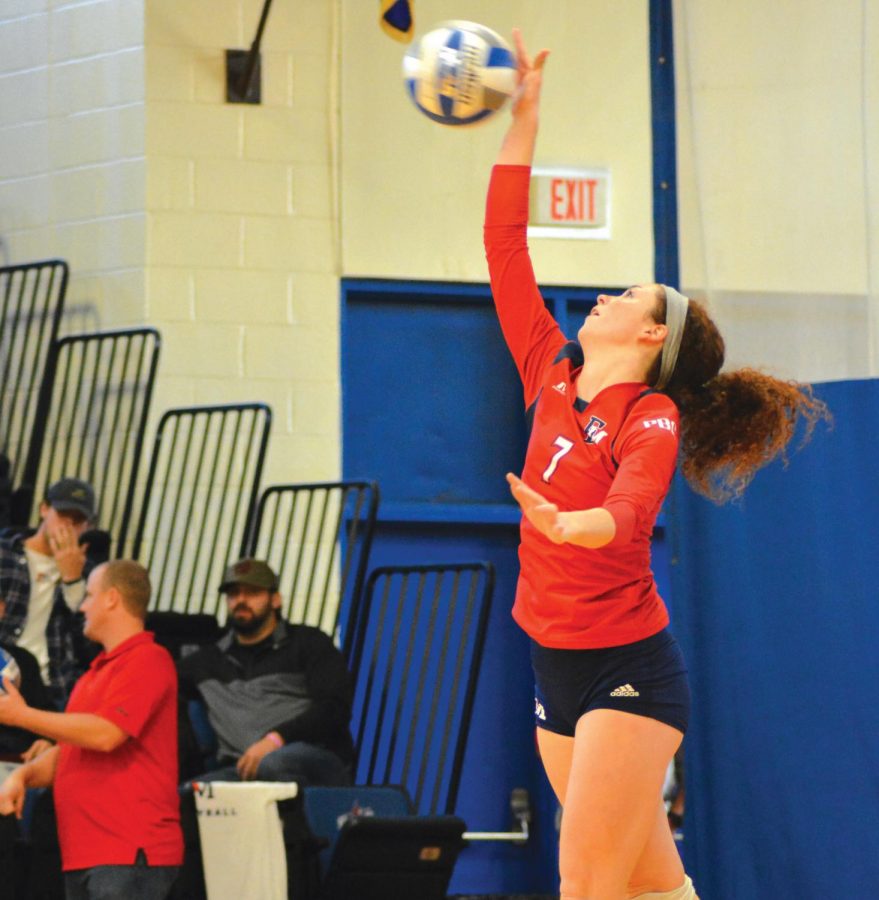 Georgia Garrison spikes the ball for the Lady Patriots during a match against Flagler College on Oct. 6, 2017.

The Francis Marion University (FMU) women’s volleyball team is setting up for their new season with a positive mindset.

The Lady Patriots welcomed six new players this fall after losing two seniors from the previous season. Shelbi Meek, of Springtown, TX, was the team’s libero before becoming a defensive specialist and an outside hitter, and Erika Hartings, of Coldwater, OH, was also an outside hitter.

Head coach Lauren Baufield said she believes a positive mindset before every game, and surrounding her players with positivity during practices, could help lead them to a national championship this season. Baufield also said she encourages her team to have the mindset of learning from their mistakes and giving it their all. Although the team is gaining six freshmen this year, there are two returning seniors, Georgia Garrison and Carrie McGinnis.

Garrison, an outside hitter from Trinity, NC, said she plans to attack every play this season as if it were her last in an attempt to lead the new team members by example. Garrison has a career total of 782 kills, 930 digs and 110 aces, while McGinnis, a setter from Knoxville, TN, has a career total of 2,138 assists, 559 digs and 53 aces.

“You have to know what to do when the ball is in play on every play,” Garrison said. “You have to have trust for yourself and for your teammates. You have to believe in each other to win games, and that’s what our team is all about.”

Freshman player Alexis Watts, of Myrtle Beach, SC, is one of the six new freshmen on the team. According to Baufield, Watts shows full-heart and dedication during practices and during games.

Watts said although she is a freshman, she has the mindset that she should learn from the more experienced players on her team, strive to be better and help her team in any way she can. She wants her team to communicate and have each other’s backs, literally and figuratively, on the court during games.

After being defeated in the first two matches, the Lady Patriots came back to win against the Lees-McRae Bobcats with a 25-20, 25-14, 25-15 sweep. Their winning streak didn’t last long, as they lost to the Royals from Queens University of Charlotte with scores of 23-25, 25-16, 26-28, 25-22, 15-13. The Royals are the defending 2017 South Atlantic Conference Tournament champion and an NCAA Tournament squad.

In their victory, Garrison racked up 11 kills and 10 digs, while freshman Lady Patriot Finn Millians, a setter from Peachtree City, Ga., registered 14 assists and 12 digs.

The Lady Patriots came back to the court with their positive mindsets after their losses on Aug. 31 for the Fleet Classic tournament at Erskine College. FMU played four matches in the event which began with a 1 p.m. match against UVa.-Wise.