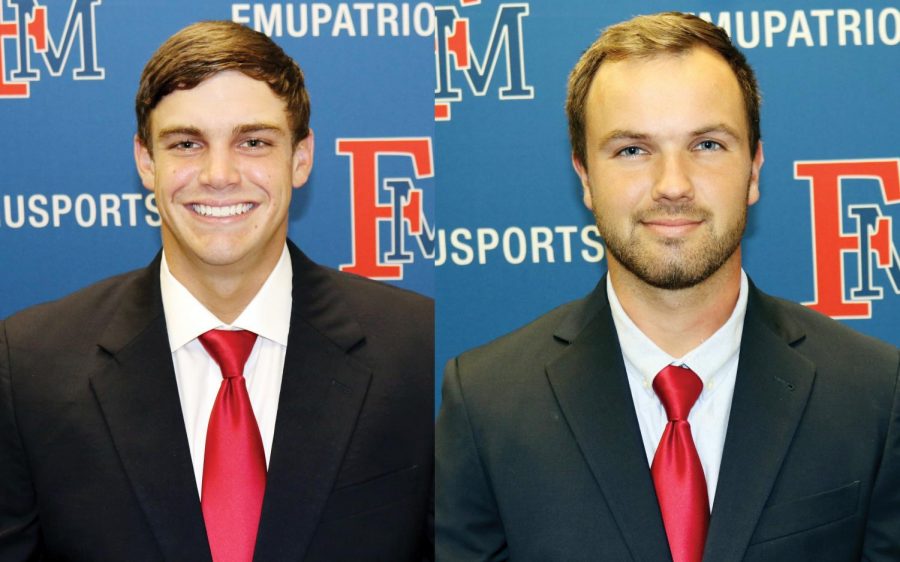 Left: Grant Sellars is a freshman from Florence, and he believes in having a positive mindset during every game. Right: Lars Sanvoll, a senior from Norway, is known as the leader of the golf team. His goal for this upcoming season is to win an event.

The FMU golf team traveled to River Run Country Club in Davidson, NC, on Sept. 24-25 to compete with 13 other college golf teams with a total of 80 golfers. The tournament was hosted by Davidson College.

Freshman Grant Sellars shot an even par on Thursday, Sept. 25, making his score the lowest on the FMU team. Five golfers from the patriot team played three rounds in two days, a total of 54 holes of golf.

Collectively, the players shot scores of 302 and 307 on Wednesday, and 300 on Thursday, leaving the Patriots trailing behind a Top 10 spot by four strokes.

Head coach Mark Gaynor said when a team knows the course very well and becomes accustomed to playing on it, the better their performance would be.

Coach Gaynor said he can tell that every day the team is improving, and with a young but talented team this year, he looks forward to seeing what this team holds in the years to come. Gaynor also said the short game was not all there during the tournament, but learning from the mistakes is one thing these leaders are enforcing on the other teammates. He tells his player to practice the way you play.

Grant Sellars, a freshman from McBee High School, was a part of the State Championship team in 2017. He said he has been playing golf ever since he can remember picking up a golf club. Wednesday, Sellers shot a 75 the first round and a 78 the second round. Sellers said he knows he can do better, and not being familiar with the course messed with his short game a lot, but that’s no excuse.

Sellers said compared to playing in high school, the stakes are a lot higher and every time he steps up to the ball he has to have a positive mindset. Sellers also said he had a few ups and downs this past weekend, but that they were nothing he can’t focus hard on to make sure those mistakes don’t happen again. Thursday, he landed more on the fairways compared to Wednesday, shooting a 72 with nine over par.

Lars Sandvoll, a senior from Bergen, Norway, competed in the tournament as well. As a leader on the team, he knows what the coach expects him to do and what kind of example he needs to demonstrate on and off the course. Sandvoll said his tee shots were outstanding, one thing that he has been improving over the past couple of season. Sandvoll said his putting game could use a little work, and he takes advantage of every chance he has to become better than he was the day before.

Sandvoll shot a 72 the first round and 74 the second round. He said he wants his numbers to be 69 and below.

On Thursday, Sandvoll shot a 77, ending the tournament with 5 over par. His short game was a key factor in shooting a 77 the second day compared to the first day when his scores were a few strokes less.

The Patriots finished tied for 11th in the 54-hole tournament. Sadvoll finished 27th in players’ standings with a total of 223, while Sellers had a total of 225, tying for 32nd.

The team will travel to Atlanta, GA to play in the Auto-Trader Invitational hosted by Georgia State University on Oct. 15-16.