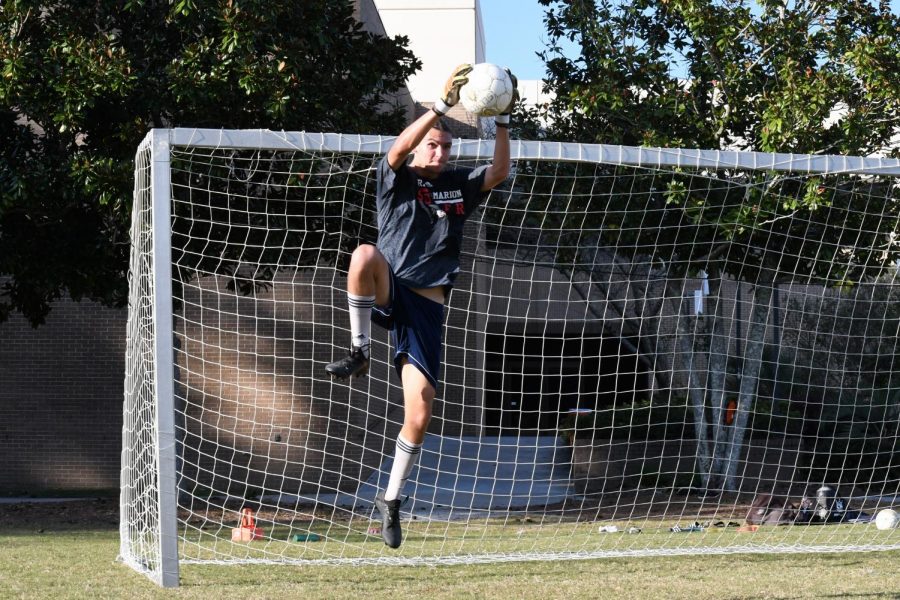 Outside of soccer, McGinnis enjoys playing his Xbox and PlayStation4, along with hanging out with his friends.

For senior FMU soccer player Blaize McGinnis, being an athlete and staying active has always been a way of life. McGinnis, a Ninety Six, S.C. native, began playing soccer at the age of five for his local parks and recreation team.

“My dad was always a sports person, so I was always doing stuff with him like that,” McGinnis said.

After entering high school, his baseball coach, who also served as the cross-country and soccer coach, encouraged McGinnis to try out for the school’s soccer team after he saw McGinnis play.

“I started at center attacking midfielder, but then the second game of the year they ended up moving me to goalkeeper just to try it because I was lanky,” McGinnis said. “I was pretty athletic and ended up having a shut out that game and then it just stuck for the whole year.”

During his sophomore year at Ninety Six High School, McGinnis said he helped lead his team to a 20-4 record, only one game away from the state championship game.

After high school, McGinnis enrolled at USC Salkehatchie, a 2-year junior college, and played his first two years of collegiate soccer there. While enrolled, McGinnis was awarded numerous academic accolades and was also named to the All-America team both years for outstanding academics among athletes.

During McGinnis’ second year at USC Salkehatchie, his team faced the FMU Patriots. The head coach of FMU’s team contacted McGinnis after the game about playing for them.

During the soccer season, McGinnis’ schedule is filled with practices along with schoolwork. The FMU men’s soccer team practices Mondays, Tuesdays, Thursdays, and Fridays with games on Wednesdays and Saturdays.

“You stay busy, but in a good way,” McGinnis said, “Because you’re always with people that care about you and you care about them. You definitely want that family feeling and you feel like you can go to them whenever you need to. It puts some enjoyment in your stressful academic life.”

McGinnis said his favorite part about being a student at FMU is the small campus size.

“The FMU campus isn’t large and because I came from a small school, a small junior college, I felt like the small environment was more for me,” McGinnis said.

While McGinnis enjoys many things about being an athlete at FMU, he admitted that it was a big adjustment from high school athlete to a college athlete.

“You just have to be more dedicated to both academics and sports,” McGinnis said. “It’s harder to do because I feel like at the high school where I was from, even though the school was pretty rough, you already knew what was coming. It was easy because you knew your routine every single day. But then with college, classes change every day.”

McGinnis plans to return to FMU in the fall of 2019 because he has one more year of eligibility to play at FMU. After graduation in Dec. 2019, McGinnis hopes to play a few more seasons of soccer somewhere. If that does not happen, he hopes to get an accounting job for a sports company and manage the team’s finances.