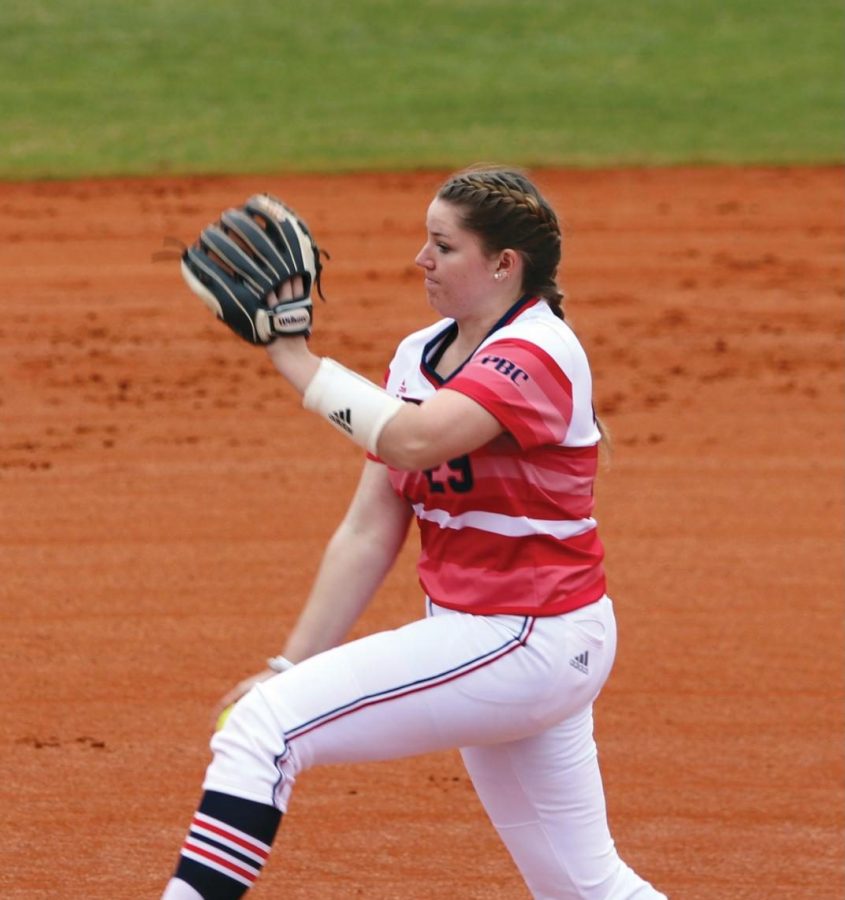 Kate Ellard winds up to pitch.

For second year FMU softball player Kate Ellard, excelling on and off the softball field has taken hard work and dedication.

Ellard, a Boston, Massachusetts, native, plays pitcher and enjoys it, but said when she first started playing softball she played midfielder.

“I started as a middle infielder, but I don’t think any of my current teammates would believe that,” Ellard said.

Ellard said her expectation for this season is to be a better player than she was her first year in every aspect.

After pitching a no-hitter against Converse College on Feb. 3, Ellard is on track to do just that.

“I was trying to not think about it during the game because I didn’t want to jinx myself, but after the game I was really happy,” Ellard said. “Seeing my parents freak out in the stands was my favorite part.”

Ellard said her biggest accomplishment was earning an athletic scholarship to college and being able to help her parents afford the cost of college, which she says was a proud moment for her.

Prior to playing softball, Ellard was a competitive jump roper, and said she tried several other sports.

“I was a competitive jump roper and tried things like basketball and soccer, but softball is the only thing that stuck,” Ellard said.

Ellard said she initially became interested in playing softball after seeing her father and brother play. She began playing at the age of 10 but did not start pitching until she was 13.

Ellard enjoys pitching because she is able to see most of the action and be the most involved player on the field.

Ellard was a distinguished student athlete while attending Green Hope High School. While there, she served as her team’s captain during her senior year and earned All-Conference honors. She was also named team MVP during her junior year and was selected twice for the All-Academic Conference.

Ellard credits FMU’s softball and marketing programs with being her motivation for attending FMU.

“My teammates are now my best friends who I just happen to get to see every day and play alongside,” Ellard said.

Ellard said the biggest adjustment from being a student athlete in high school is that playing in college is full-time and time consuming. She also said playing a college sport is like having a full-time job.

“It becomes your life in college rather than just a pastime, hobby or a thing you do on the weekends,” Ellard said.

Ellard and FMU’s softball team practices daily. On Mondays, Wednesdays and Fridays, the team runs in the mornings. On Tuesdays and Thursdays, the team lifts weights, with a daily practice in the afternoon.

“We play on the weekends while in season, so it’s like a full-time job,” Ellard said.

Ellard’s advice to incoming student athletes is to be productive.

“Be proactive with everything you do,” Ellard said. “The worst thing you could do is fall behind in a class, your lifting regimen or that horrible conditioning your coach is making you do over break.”

After graduation, Ellard plans on getting a job in either public relations or human resources.

“I’m hoping to get a good job in PR or HR,” Ellard said. “Wherever it may take me is where I will end up living.”

Outside of school and softball, Ellard said she enjoys taking naps and eating at new places.