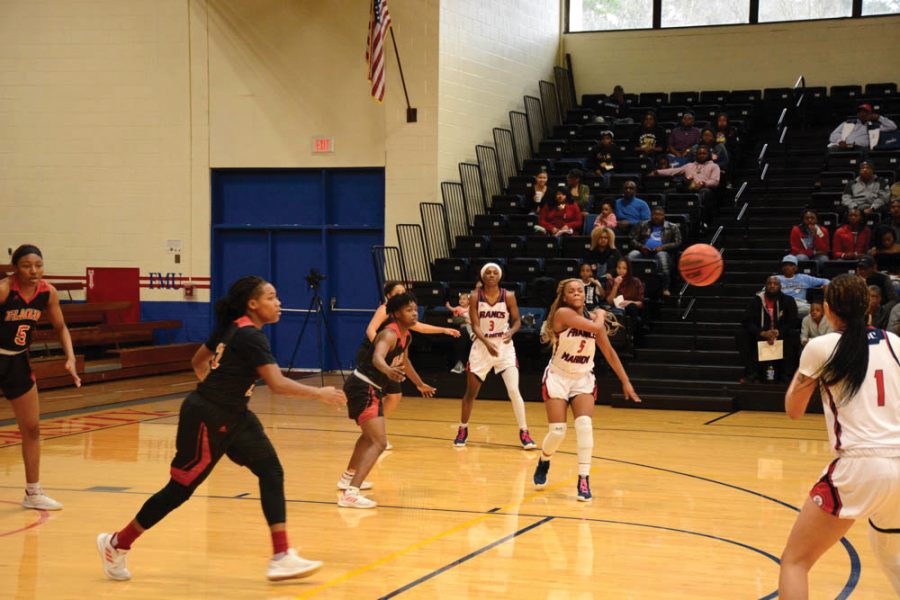 The Lady Patriots hung on to 8th place in the Peach Belt Conference and shot better Saturday than they had in a month.

Bullock led the team with the most assists, with a total of 4 assists.

The Lady Patriots began the first quarter with a defensive trap by Adderton and Woods, creating a steal for Woods and a turnover from Flagler.

Adderton fueled the team and created momentum, scoring the first two points of the game for the Lady Patriots and tying the score 2-2.

“I feel like my overall performance was good, but there is always something you can do better,” Adderton said.

During the first quarter, the Lady Patriots played man-to-man defense but switched it up to a zone defense to adjust to the offense.

Head Woman’s Basketball Coach Teri Porter said they were working hard, but the other team was working harder.

“In the first half, they outworked us a bit and played a little harder than we did,” Porter said.

Bullock made the first three-pointer of the game, bringing the score to 9-11 at the three-minute mark.

The Lady Patriots played a solid defense, keeping the fouls low throughout the game and fed the ball to the post more on offense.

The team competed hard in the first quarter but fell short, digging themselves into a 10-point hole ending the first half 23-33.

The Lady Patriots improved in the second half of the game. They came back and played better defense and started scoring points on offense, allowing them to make a comeback.

“I was pleased with our efforts in the second half, but I was a little disappointed that we came out as flat as we did in the first half,” Porter said.

Flagler’s Tabitha Odabe proved one of the biggest challenges for the Lady Patriots.

“The first time we played them we talked about collapsing on five and doing a better job playing defense on her, but I don’t think we did a good job of that today,” Porter said.

Woods scored the first two points of the second half with an assist from Bullock.

“Number five is a nice ballplayer and her team kind of plays off of her,” Porter said.

The Lady Patriots competed with a lot of energy in the second half and came close to winning the game, but they didn’t quite handle the ball as well.