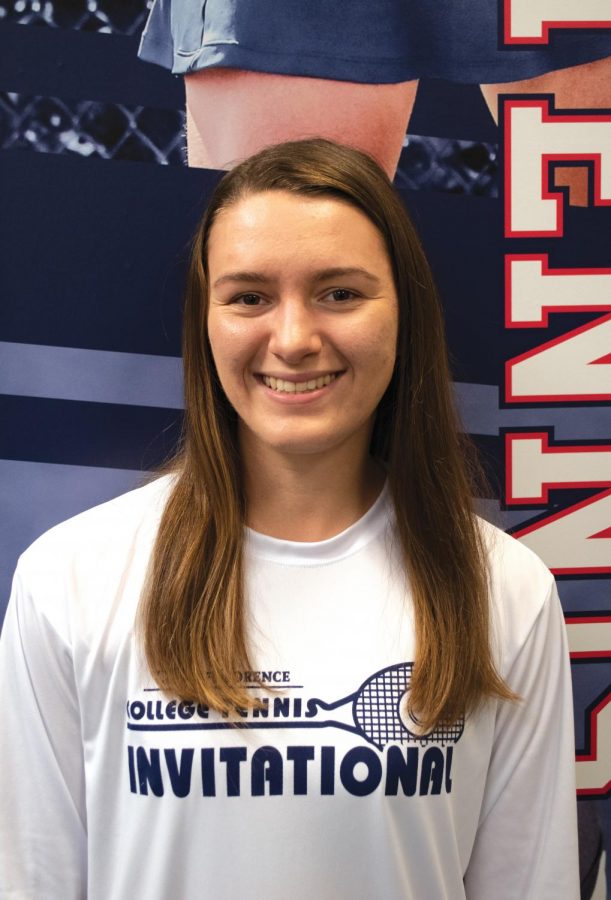 Nikita Berger advices incoming student athletes to find a balance between their sport and academics.

Nikita Berger, a second-year tennis player at FMU, has made excelling on and off the tennis court a way of life.

Berger, an Oregon native, said she began playing tennis when she was 5.

“Actually, my older cousins played tennis, so we grew up playing the same sport and I played with my sister as well,” Berger said.

In addition to playing tennis, Berger, who grew up in Illinois, also ran track and field for two years in high school.

Berger also played in the K-Swiss Kiawah Island Championships in October 2016 and prior to moving to Hartsville, Berger was a standout at Unity High School in Quincy, Ill. where she also qualified for the state singles tournament.

Berger and her family moved to Hartsville during her junior year of high school where Berger attended Hartsville High School.

“He seems to be a really humble player and he’s worked really hard to get where he is,” Berger said.

Berger, a biology major, credits FMU’s tennis and academic programs as the reason she initially chose to attend FMU. She said her favorite part about being an FMU student is that everyone isn’t the same.

“I like that there’s diversity here, especially on the tennis team,” Berger said. “You get to know other cultures, people from all sorts of different countries.”

According to Berger, her biggest accomplishment related to tennis has been the improvements she has made on the tennis court.

Berger said balancing between school and an intense training schedule has been easy for her.

“We practice a lot and we have our morning lifting; it’s not that hard to find a balance between the two,” Berger said. “There’s a time to study and then there’s a time to play tennis.”

Berger and FMU’s women’s tennis team weight lifts in the morning on Wednesdays and Fridays and the team usually practices four days a week for two hours.

Berger said if she was not a member of the tennis team, she would probably play another sport, although she is not sure which.

Berger’s advice to incoming student-athletes is to have discipline and have a good schedule to balance between academics, their specific training schedule, practices and games.

FMU Tennis Head Coach Garth Thomson said Berger is a hard worker both on and off the court.

“As her coach, I can count on her to give her best effort on the tennis court and in the classroom,” Berger said.

Thomson also said Berger has a bright future ahead of her.

“Nikita is a competitor and has started the season with a winning record in both singles and doubles,” Thomson said. “We will see how she does over the full tennis season, but I am sure she will have a successful season for us.”

After graduation Berger hopes to become a tennis coach.