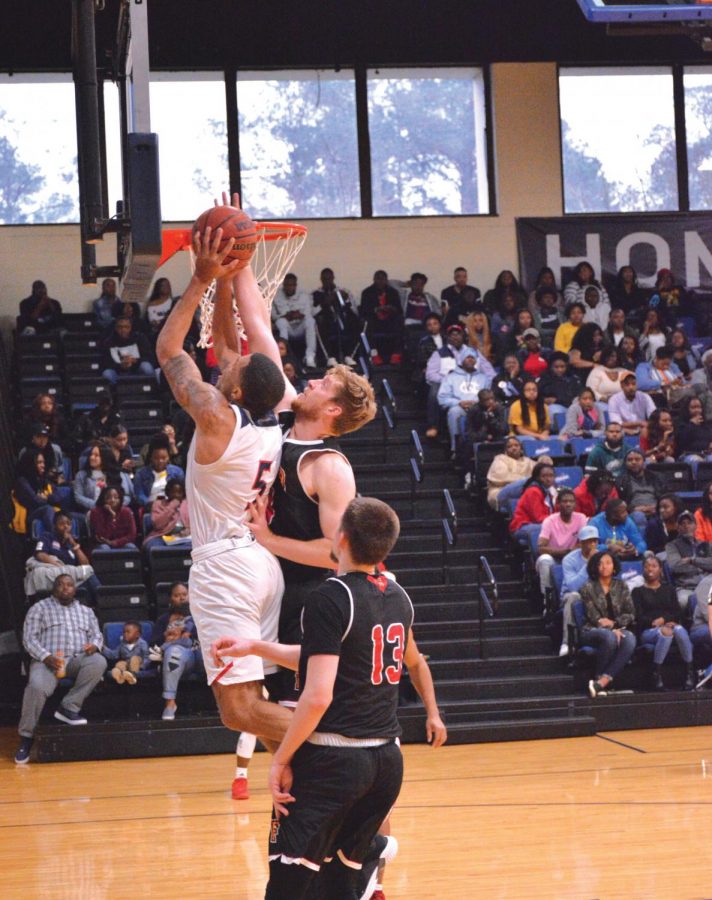 The FMU men’s basketball team was victorious, 84-71, in its Homecoming match against Flagler College on Saturday, Feb. 23 at the Smith University Center.

After the win, the Patriot’s overall ranking is 19-6 and 15-5 in the Peach Belt Conference keeping them in third place as they progress toward the finals.

Leading the team in scoring and assists, guard Brandon Parker put a total of 19 points on the board. Trailing closely behind him with 18 points was guard Ryan Davis.

Parker scored the first three-pointer of the game and gave the team a one-point lead.

The Patriots took over defensively, creating a lot of turnovers for Flagler, forcing them to turnover the ball 21 times.

“We did pretty well on defense tonight despite a few lapses, but overall I was very pleased with our efforts,” head coach Gary Edwards said.

The Patriots’ defense got stronger throughout the game, creating a lot of easy points for the team.

Losing the lead in the first half, forward Kailex Stephens scored two points with a layup, tying the score 7-7 followed by Hill with an easy two-pointer taking back the lead.

“We wanted to work on feeding the ball to the post more and attacking the paint,” Hill said.

Guard Kendall Wall was fouled as he scored a three-pointer creating the opportunity for a four-point play.

Hill came down the court with 5 minutes and 38 seconds in the game and scored his first three of the game giving the team a 16 point lead.

The Patriots had just 8 turnovers due to a solid defense.

“For this game, we wanted to try and make them turn the ball over a lot and we did,” Edwards said.

Having played Flagler already, the Patriots were aware of the weaknesses of their guards and based their defense off of that.

“We told ourselves that we were going to attack their guards more and put pressure on them to make them turn the ball over more,” Hill said. “I think we did that well in the first and second half.”

During halftime, FMU announced the candidates for Homecoming Queen and King and announced the winners after the game was completed.

At the end of the game, FMU crowned students Gabriel Hutson and Shiniyah Brown as Homecoming King and Queen.