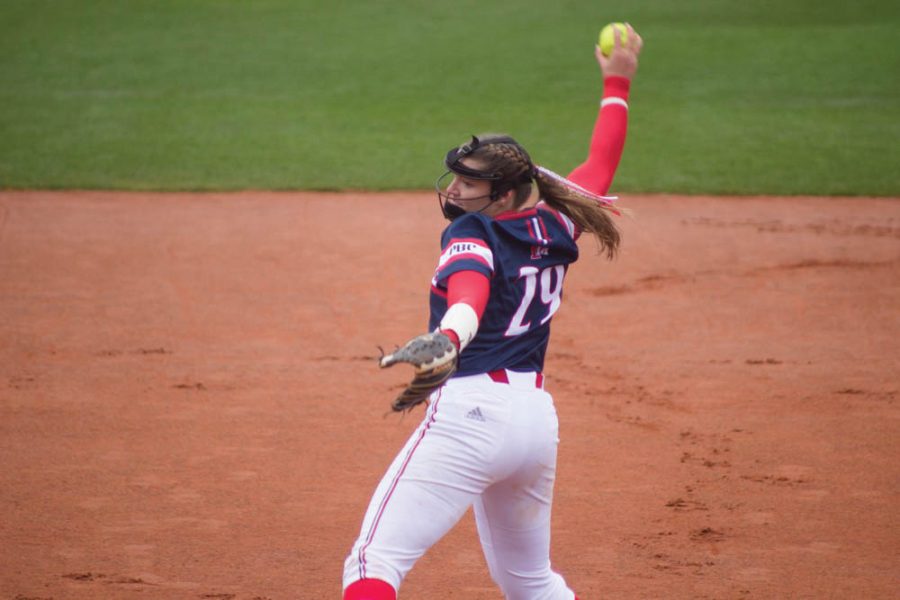 Katelyn Ellard winds up to pitch.

FMU’s softball team lost a rainy battle in their game against Belmont Abbey College on March 20 at the Griffin Athletic Complex.

The game ended in the 7th inning after rain made it impossible to continue.

The Lady Patriots rank 18-11 in the Peach Belt Conference and started their batting lineup with five of their seniors.

Senior infielder Angela Buccilli tipped the ball just left of center field but didn’t quite make it to first base before being struck out by Belmont Abbey’s defense.

Both teams played to the best of their ability, but the rain was a huge factor; it fluctuated between a soft drizzle and heavy rain.

In the bottom of the second inning, freshman infielder Danielle Karacson batted and drove the ball down far center field, but struck out after the defense caught the ball.

In the top of the third inning, senior hitter Jaimie Harney caught a ground ball and made a defensive play, tossing the ball to senior first-baseman Jessica Harney and striking out a Belmont Abbey runner.

In the bottom of the fourth inning, Jaimie batted a ground ball to left field and made a successful run to first base, collecting the second hit of the game. Karacson also had an impressive hit, striking the ball far out down the left field line giving the team extra bases and getting a triple.

Jaimie scored all the way from first base off the double by Karacson.

The Lady Patriots loaded the bases twice throughout the game.

“I thought my pitching was good overall, but I do feel like I could have done better hitting,” Hemingway said.

The momentum reached an all-time high when the Lady Patriots got the opportunity to tie up the game in the sixth inning.

In the bottom of the sixth, Karacson struck the ball out far out the left-center field and it rolled, giving her a second double of the game.

Freshman first-baseman Addie May couldn’t quite make the run to base as she was stopped by Belmont Abbey’s defensive play.

Hemingway ended the sixth inning with another impressive hit, but was struck out.

The rain began to come down harder as the game progressed, delaying it until it was cancelled, giving Belmont Abbey the victory.

“I was happy about the fight that we had,” Vallee said.