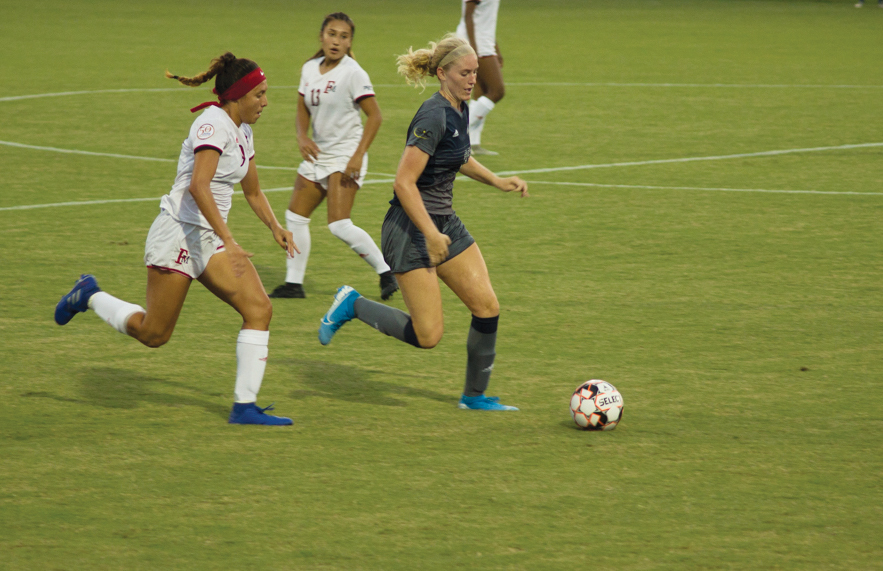 Zania Nava and Rianna Orello try to reclaim the ball from a Catawba College player.

After an intense game, the Lady Patriots soccer team couldn’t pull off the win and fell 2-1 to Catawba College on Wednesday, Sept. 11.

Even though Wednesday’s game was not a conference game, the Lady Pats overall record dropped 1-1.

Before the game started, both teams had a moment of silence to pay respect to all of the lives lost on 9/11 and to sing the national anthem.

After playing hard and staying strong throughout the game, sophomore defender Kiley Barr managed to register an impressive shot that hit Catawba’s crossbar.

Junior midfielder Dayle McEwin scored the team’s only goal late in the game, trailing behind Catawba College by two goals.

McEwin and junior defender Brooke Kennedy were most likely to score, leading the team with two shots apiece.

The first half of the game was shaky as the Lady Pats had to break down the aggressive defense of Catawba College.

Senior defender Sierra Cartano played smart and drove up the field with the ball and made an impressive play to the box during the first half.

Later during the first half, the Lady Pats started to move fast on offense, causing Catawba College to lag behind.

Sophomore defender Makayla Chavis closed in on Catawba College’s Sarah Bissett and slid across the ground for an impressive stop.

Freshman forward Zenia Nava and senior defender Jessica Garnette also had some impressive stops throughout the first half.

Sophomore forward Faith Allen came off the bench 25 minutes into the first half and speedily made a play to the box, but she wasn’t able to score.

Although the Lady Pats played an unbreakable defense during the first half, they had trouble being in the right place on offense.

Sophomore forward Rihanna Orello stayed determined the entire time and sent the crowd into a craze with a stunning bicycle kick over the head, moving the ball away from the defense and driving it up the field.

During the second half of the game, the Lady Pats honed in on offense and defense.

The Lady Pats had a 7-3 advantage in corner kicks for the game.

Nava was unstoppable on offense and powered through her defender making a play from the corner, but was unable to score.

Overall, the Lady Pats played an impressive game defensively and broke down the offense of Catawba College, but couldn’t quite get the win.

“I think our team put out a great performance and I’m extremely proud of how we fought back for our goal,” Cartano said.

The first score of the game for the Lady Pats really increased the momentum and intensity of the game.

“Our strongest point was fighting back for our goal,” Cartano said. “After that, we had a lot of possessions and a lot of chances.”