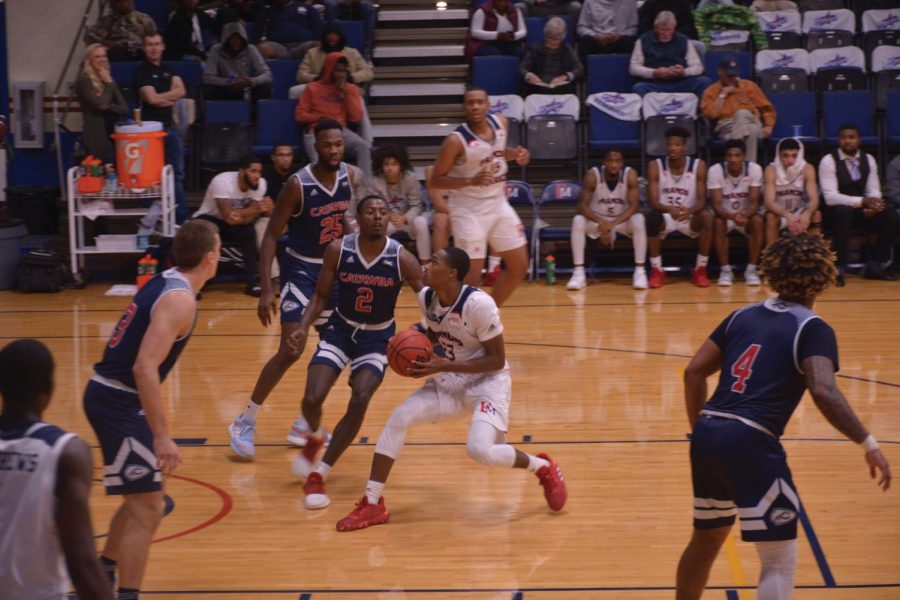 #23, Ja'Lil Robinson sets up a shot against Catawba.

The team really showed some great potential for the future. FMU shot 38.3 percent from the floor and 21 of the 27 charity tosses. The team had 10 assist and 26 points in the paint. The team also achieved 37 rebounds and was 23 for 60 in field goals.

Saturday’s game was the second game for the Patriots in the PBC/SAC tournament.

Leading the Patriots for two games back to back was sophomore center Winston Hill, who recovered 13 rebounds and scored 23 points. Hill had three blocks and achieved a career-high in rebounds.

Hill has just finished recovering from shoulder surgery that he had over the summer in May.

“The process after surgery was horrible,” Hill said. “It was the hardest six months of my life, but all of it was expected because I knew it was going to be tough. Luckily, I had my family to help me get through it.”

Like all the other players on the team, Hill is a team player and brings a lot of energy to the court for his team when he plays.

“I do what my team needs me to do and I’m working every day to get to where I want to be,” Hill said.

Junior forward Keith Matthews scored 15 points, only one point less than his career-high at Stetson University in Florida, and 10 rebounds.

Right behind Matthews was senior forward Kendall Wall with nine points, six rebounds and a team-high of six assists.

The game started off very competitive. Both teams trailed close behind each other on the scoreboard.

Smith scored a layup, giving the team the highest lead of the game in the first quarter.

Head Coach Garry Edwards was very pleased with how hard his team fought throughout the game despite some obvious mistakes and areas for improvement.

“Even though we lost tonight, we saw some really positive things tonight,” Edwards said. “We still have a lot of things to work on obviously, but I saw some hope tonight because I thought we played harder and we battled and we rebounded with a very big team.”

This game showcased the strengths and weaknesses the team needs to work on and use as their plan for attack.

Saturday’s rebounding and points in the paint improved from the previous game on Friday.

“We knew we had to give up something so we gave up three-pointers and the big question for us was, ‘Were we going to be able to get the rebounds?’” Edwards said.

Hill and Smith were impressive throughout the night, but Matthews had a big night.

“We need Keith [Matthews] to hit shots for us and he did and that made me feel really good,” Edwards said.

Edwards hopes to make some new offensive developments for the team.