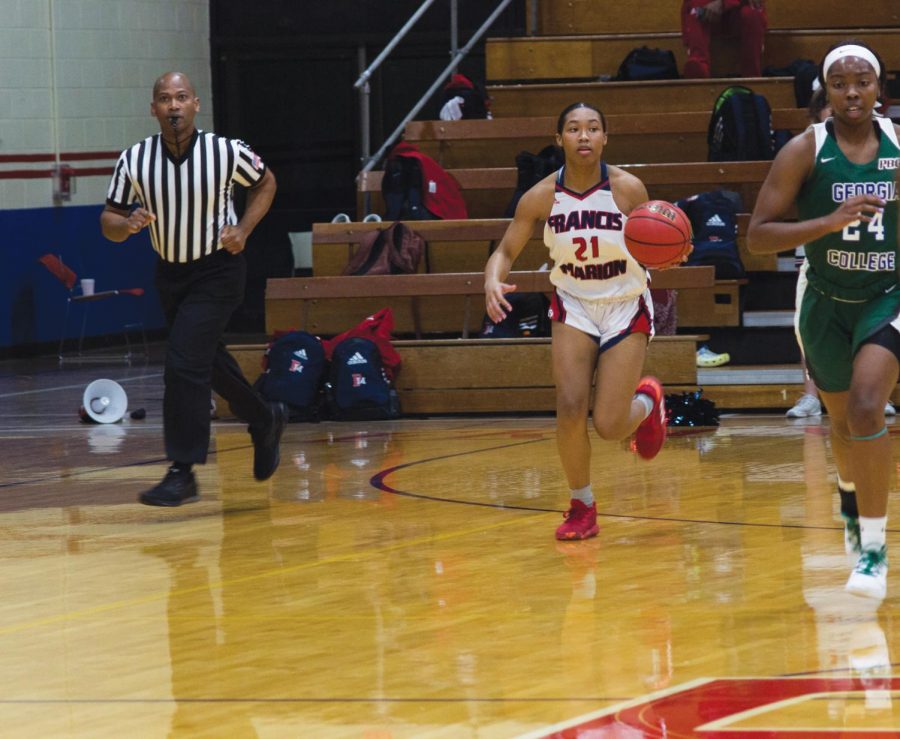 #21, Scarlett Gilmore, makes her way down the court.

In a very competitive match, the Lady Patriots defeated Georgia College 67-52 on Jan. 12 in the Smith University Center.

At the start of the first quarter, the Lady Patriots came out unstoppable on offense and defense, keeping Georgia College scoreless for the first five minutes of the game.

Georgia College’s guards were no match for freshman guard Scarlett Gilmore. Gilmore led the team with 18 points and 3 assists.

Six of Gilmore’s points were two impressive three-pointers out of a total of three attempts.

Head Coach Jeri Porter was very proud of her team and attributed their success to Jesus and pure talent.

“I am so proud of this team,” Porter said. “I think after the Clayton State game that they were a lot tougher between their ears now.”

Although the entire team played outstandingly, this was yet another great game for Gilmore.

Coming in as a freshman with her knowledge and natural talent for the game is something that makes her stand out.

“Scarlett is a bucket, as they say, and that’s what I loved about her when I watched her play last year at South Point High School,” Porter said.

Porter expressed that they were looking for someone who could be aggressive on both offense and defense, and she was very happy to see that Gilmore was able to do both.

“She is huge for us right now,” Porter said. “We are asking her to do a lot of things on both sides.”

Following behind Gilmore was junior forward Kianna Adderton with 17 points and four assists.

Adderton has been a very consistent player this season so far. She is a team player and is always there when her team needs her on the court, and tonight was yet another game where she did just that.

Before she graduates in May 2021, Adderton hopes to solidify 1000 points and 500 rebounds. As far as goals for the team, she would like to win the conference and get a ring.

The Lady Patriot’s defense was a strong front for Georgia College. In the first quarter, the Lady Patriots applied a lot of pressure by full-court pressing and transitioning quickly in a 2-3 defense.

The players coming off the bench played just as well, scoring 23 points altogether and keeping up the momentum during the game.

The Lady Patriots had been on the road for a while with back-to-back away games and didn’t get a break over the holiday weekend, yet they were still able to push through and secure the win.

During the game, sophomore center Zaria Woods injured her ankle and her teammates stepped up and stood in the gap for her.

“When Z, our post, got hurt I knew we needed to score because she is our key point in scoring,” Gilmore said.

Going into the game, Woods was feeling sore in her Achilles tendon so Porter limited the amount of time she played.