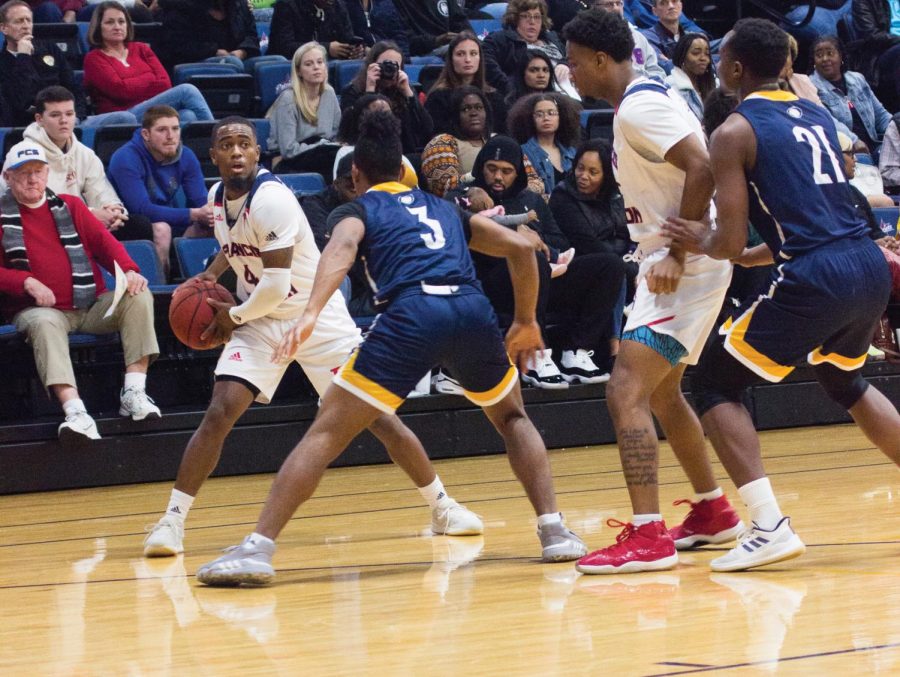 With the help of a hopeful and anxious crowd, the Patriots put an end to their losing streak and defeated Georgia Southwestern 83-75 at 3:30 p.m. on Feb. 1. during Homecoming weekend

Sophomore center Winston Hill led the team once again with 30 points, grabbing eight rebounds, four assists and scoring on 13 of his 23 shots.

Hill was one below his career-high of 31 against UNC Pembroke on Jan. 29.

Following behind Hill was junior forward Keith Matthews with 21 points, 8 rebounds and shooting 6-16.

Matthews was also 8 out of 8 at the free-throw line.

Head Coach Gary Edwards had nothing but good things to say about Matthews.

“You know, he is nursing a bad knee, but tonight he played stronger,” Edwards said. “And that’s what we like to see.”

Matthews said the only thing on his mind for the homecoming game was winning.

“We needed to get a win badly,” Matthews said. “Our girls had just won, we had a packed house and I didn’t want to disappoint.”

Senior point guard Jaquez Smith hit the boards hard with 10 rebounds. Smith had the most rebounds for the team, on top of nine points and nine assists.

Smith said rebounding was one of the things that helped them win the game.

“Me being able to get rebounds helped our pace tremendously,” Smith said. “It helped us to get easy buckets.”

Sophomore guard Alex Cox brought in 8 points, shot 3 out of 7, with two rebounds and four assists.

The Patriots were 46.2-percent from the field and Georgia South Western was 41.7-percent.

The Patriots turned up the heat on defense and scored 17 points from turnovers alone.

In the last few seconds of the game, Smith and Matthews were fouled and each of them shot two free throws apiece. Those free throws secured the win for the Patriots.

The team looks forward to having a better season entirely.

“Our expectation as a team is always the same,” Smith said. “Win games and make it to the PBC tournament. Personally, I would like to see us compete for a whole 40 minutes.”

Edwards was overjoyed with the performance of his team.

“The guys really deserve it,” Edwards said. “They’ve been working really hard through this tough stretch in January.”

January was rough for the Patriots, suffering from a ten-game losing streak.

“January was a harsh month for us,” Edwards said. “So, I’m looking forward to February being better for us.”