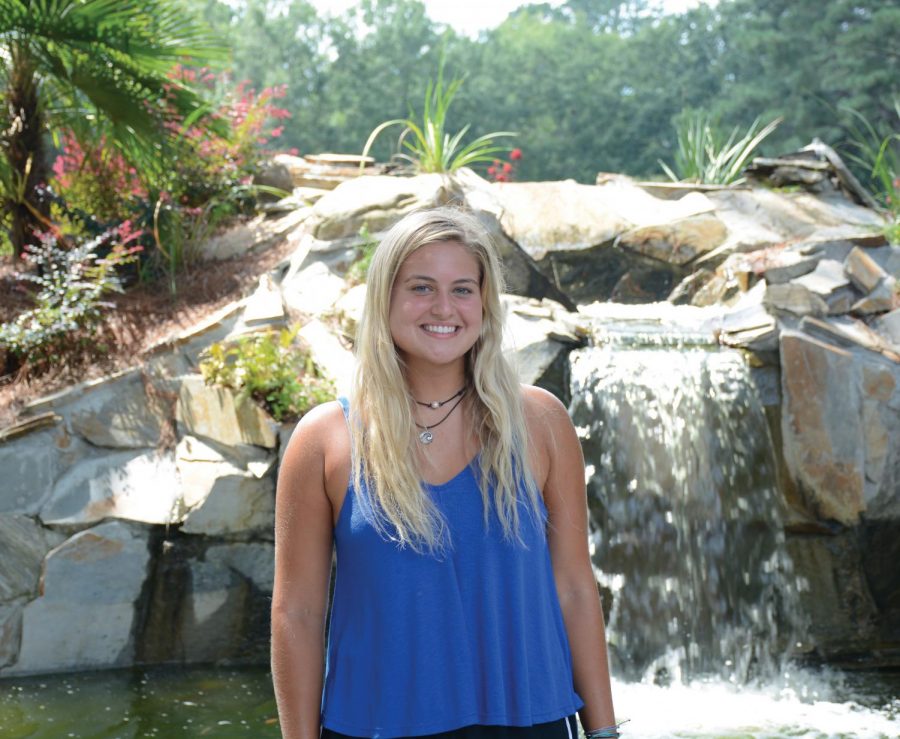 Camryn Cassetori is looking forward to her new position as vice president of honors and the upcoming tennis season.

A standout athlete from the Wilkes-Barre/Scranton area in Pa., Camryn Cassetori wants to bring the same enthusiasm to the court and classroom at FMU.

Cassetori, a freshman English major, gained a reputation for her accolades on the tennis court in high school.

“Back at home, I was really well known in my area for tennis,” Cassetori said. “I was captain of my team. We won the district in doubles; that was the first time my school won a district championship in tennis. My partner and I made it to the Elite 8 in the state.”

Cassetori’s aunt also played tennis at USC Aiken, which was one of the reasons why she chose a school in S.C.

“I love the warm weather, and my aunt went to USC Aiken,” Cassetori said. “I haven’t seen too much of Florence, but I love South Carolina in general. I knew I wanted to go to a medium sized school. I like asking questions and I’m very outgoing.”

Despite being new to the area, Cassetori has enjoyed her time at FMU.

“I don’t know a lot of the local things or history,” Cassetori said. “I feel very welcomed; I fit in pretty easily. It’s been pretty easy adjusting.”

Recently elected as vice president of the Honors program, Cassetori has already begun to make her mark at FMU.

“Because I play tennis, there are a lot of good things that tennis has taught me, being an athlete, that I can apply to being a good vice president,” Cassetori said. “I like being a part of things like that. It’s a good way to meet people. I’m used to working with other people; tennis has helped me to develop good communication and organizational skills. I thought I could add some zest and zeal in the position.”

Cassetori said it can be difficult to juggle school, tennis and a social life.

“If something has to give, it is going to be social things,” Cassetori said. “I’ve already made some good friends on the tennis team. You can always do your homework with people and staying organized has helped me to balance it.”

Cassetori has high expectations in her curricular and athletic activities at FMU.

“I’ve been playing tennis my whole life, so I’ve always been used to balancing schoolwork and tennis,” Cassetori said. “I know I want to be a successful student and a successful athlete. That really drives me. I work ahead in school, that way I don’t feel don’t submit last minute.”

Cassetori’s dream is to become a lawyer, and she plans on putting her English major to good use.

“When you’re in the courtroom, how you speak and deliver your evidence is important, but ultimately when the judge and jury go back to make their decision, what they have in front of them is your brief,” Cassetori said. “You have to have really good writing skills to be persuasive.”

Starting the tennis season at FMU in the top six, Cassetori is looking forward to growing and working with her new teammates.

“I think I’m going to learn a lot,” Cassetori said. “It’s a great learning experience. It’s nice to have someone else to learn and grow from. They are all so good, and they’re going to make a better tennis player by playing with them and being challenged. I’m really excited.”

Despite practice officially starting later this month, Cassetori has already started to hit the tennis court.

“I’ve always been organized,” Cassetori said. “I’m used to playing tennis a few hours every day. My roommate and I have been hitting every day I’ve been here.”