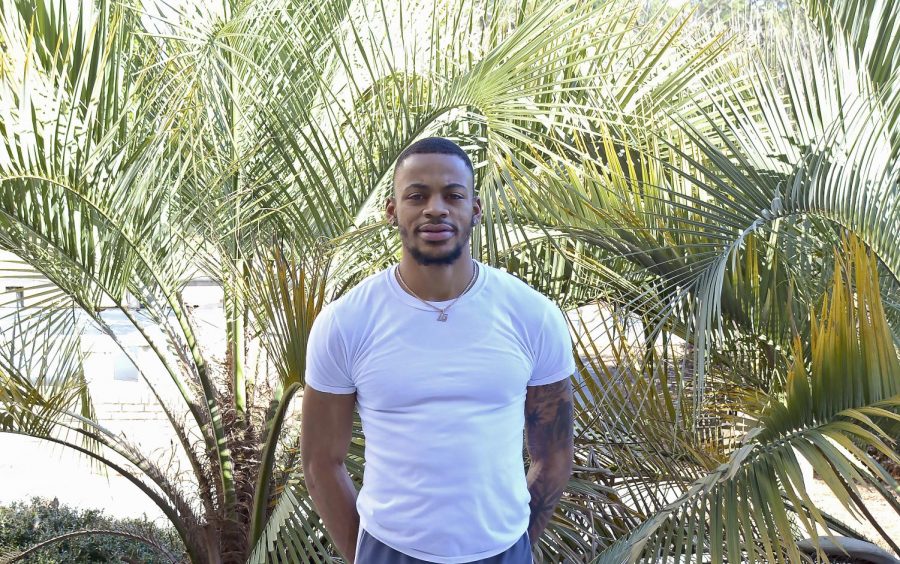 A new addition to the men’s basketball team, Langston Gaither is already making his mark at FMU.

A junior sports management major and a recent transfer from Grayson College in Texas, Langston Gaither is no stranger to the grit and hard work required for success.

“I always wanted somewhere I could go where I’d have opportunity, and Coach Edwards told me I would have an opportunity to play and make good decisions with teammates and really do something special,” Gaither said.

Originally starting his collegiate basketball career at Howard University in Washington, D.C., Gaither transferred to Grayson College, a junior college (JUCO) in Denison, Texas, for his sophomore year looking for a new opportunity.

“Basketball was always the sport that could lead me to the next level,” Gaither said. “The biggest thing for me was having an opportunity to play.”

Starting from a young age, Gaither saw basketball as the only sport, the only activity. It was everything.

“I started playing when I was seven or eight, taking it seriously, working out before school and stuff,” Gaither said. “Now I really just continued that, I never really played any other sports.”

Disciplined and driven, Gaither is always looking to get those extra reps; the first in the gym and the last to leave. That dedication has paid off.

Since his debut at FMU early this year, Gaither has certainly made a splash. One half of the infamous “dynamic duo” along with teammate Holden Redparth, Gaither performs in the top of most statistical categories in his games. Scoring an average of 23.8 points per game, Gaither ranks high in the PBC and in the entirety of the NCAA DII.

Since the Patriots lost many of their previous starters from last year, they are a rather young team. Gaither, transferring in as a junior with Division I experience, wants to be a leader and help the team succeed.

“I am just trying to be a leader,” Gaither said. “We are a young team, a new team. I am really looking forward to the second half of the season.”

Life for Gaither, while primarily influenced by basketball, is not only about the sport.

A sports management major, Gaither is trying to expand his knowledge to grow his business, 2 Assist Fitness.

“I already am a certified personal trainer,” Gaither said. “I got certified while I was in JUCO and started doing classes outside of school and taking certification classes.”

His time in Texas, surrounded by big, beautiful gyms, inspired him to start pursuing his dream a bit earlier than he expected. He earned his certifications and started teaching classes outside of school. After transferring to FMU, he used his business and Instagram page to give online training programs to new clients.

Gaither hopes that his performance as an athlete will give him some leverage as a personal trainer.

“What we’re doing this season, I want to show that we can win, so I can take that to my business and say, ‘Hey, if you want to win, come train with me,’” Gaither said.

As he continues to pursue his degree and finish his basketball career, he has plans to expand his business and broaden his work experience. He even uses team weightlifting to focus on his craft.

Besides personal training and basketball, only one other thing ranks high in his priorities: family.

“I talk to my parents every day,” Gaither said. “My family means everything to me; that’s why I do what I do and why I work so hard. It’s definitely good being back on this side.”

From half a country to a couple of states away, Gaither is glad to be close enough to see his parents sometimes. It may not be D.C., but it is certainly closer than Texas.

Find Gaither on the court as the Patriots continue their 2021 season and fight for a coveted bid to the NCAA tournament.