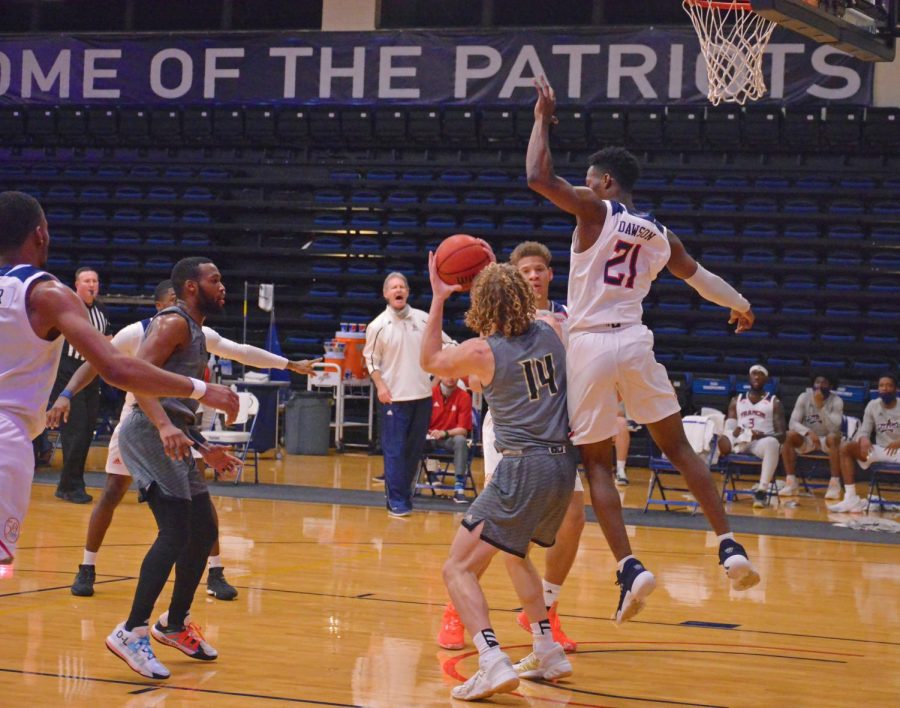 Darius Dawson #21 tries to block an attempted shot from Braves #14 in a hotly contested game.

Despite an early lead and multiple players tallying up more than 15 points apiece, the Patriots suffered a close loss to the UNC Pembroke Braves 80-82 on Jan. 27 at 7:30 p.m.

Holden Redparth, a senior transfer and guard, led the team with a double-double—24 points and 10 rebounds in total—while also providing a handful of assists and steals. He was also 7 for 7 at the free throw line.

“My rebounding and the energy I bring to the table contributed to the game,” Redparth said. “I’m a leader, and I want to help get everyone on the same page; bring the energy up.”

Redparth has been performing at the top of his team, or close to it, since the beginning of the season. He and his teammate, Langston Gaither, put up most of the points each game and have even been nicknamed the “dynamic duo.”

Even with the dynamic duo and a contribution of 16 points—12 of them from the 3-point line—from junior guard Alex Cox, the Patriots were unable to edge past the Braves in the final half.

“We really played hard the whole game,” Gaither said. “We just got to stay with our stuff. We had a couple possessions where we fell off mentally. When we get tired, we just have to stick with it. We have to talk a little bit more.”

The Patriots tallied up a total of 20 fouls on the Braves, and the Braves only gave them 12. Of the 20, 14 were in the second half. From the free-throws garnered from the fouls, the Braves accumulated 16 points in total.

“We also fouled a lot pretty early in the first part of the second half,” Gaither said. “That’s a lot of easy points.”

Though there was some inevitable disappointment from the loss, the Patriots are focused only on the wins in the future.

“We got better from this loss,” Redparth said. “The next nine games are super important; we are trying to make the tournament.”

They certainly ended on a good note with a steal and dunk from junior forward Uhana Ochan.

“There are a lot of games left,” Gaither said. “We just have to win out for the rest of the way.”

The Patriots next home game will be on Feb. 6 at 5 p.m. in the Smith University Center against Clayton State. Live stats and the livestream will be available through the athletics website.