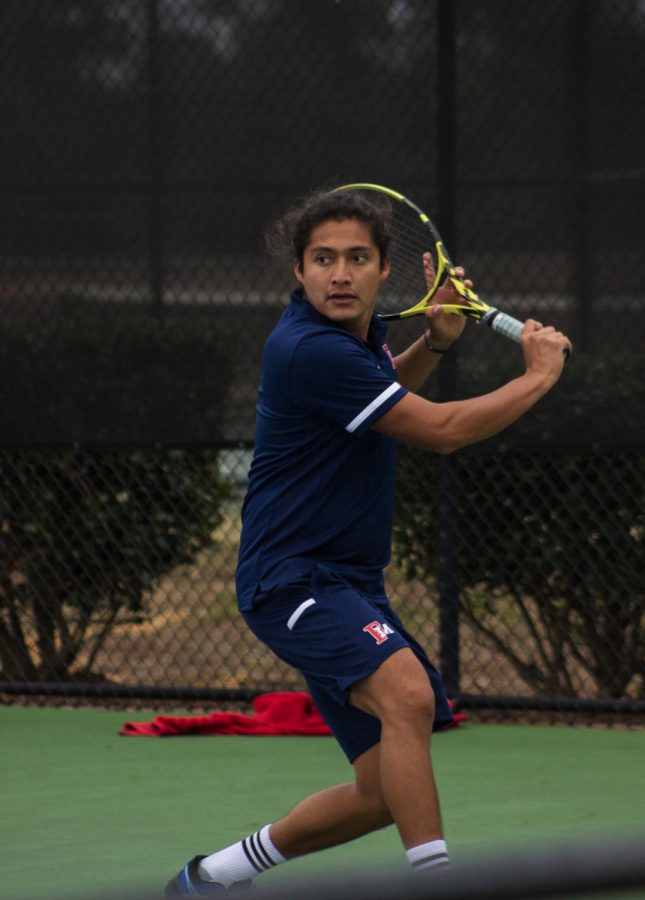 Mauricio Guerrero gets ready to return the ball to his opponent.

In the season opener for both Patriots’ tennis teams, the men’s tennis team yielded tough losses to Bluefield State College and Coker University 0-4 and 3-4 at 10 a.m. and 2 p.m. on Feb. 6 at the Dr. Eddie Floyd Tennis Center.

After going 0-3 in the doubles event, the men slightly bounced back in the singles with two wins by default from Guerrero and Ernberg with victorious first sets and unfinished remaining sets.

After the unfortunate results from the morning, the Patriots brought more competition to Coker University in their second match of the day.

The doubles event had the same matchups, but Guerrero and Gonzalez emerged victorious, finishing 6-1 against their opponents.

Guerrero, one of two seniors in a team largely comprised of freshman, was disappointed in the day’s results, but acknowledged the opportunity for growth.

“The first match was a tough loss,” Guerrero said. “I think we had big expectations because of how we practiced. We had a bad start in doubles, and I think it was hard for the freshmen. It was their first matches.”

Even with the performances and results of the team, Guerrero is looking forward to the rest of the season and has high expectations for the future.

“At the same time, we got a lot of feedback from the players,” Guerrero said. “One thing is practice, and one thing is playing. The second match was better. I have good hopes for the guys. I’m looking forward to the rest of the season.”

Gonzalez, one of five freshmen, played his first collegiate tennis matches at the tournament. Though he was nervous and upset about the results of the weekend, he is excited about the future season.

The Patriots’ men’s tennis teams next home game will be  against Chowan University at 12 p.m. on Feb. 27.