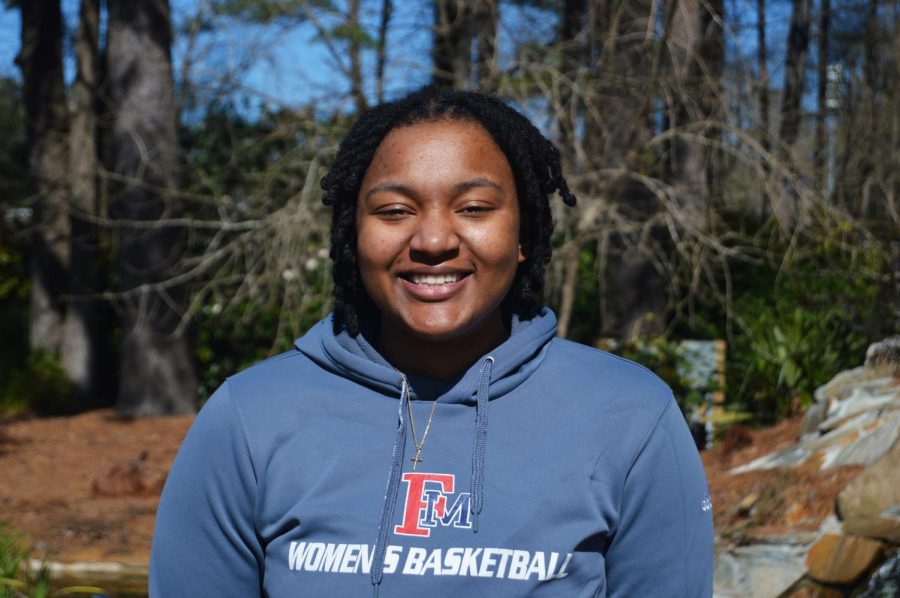 Lauryn Taylor’s dedication to basketball has been a fundamental part of her FMU career.

It’s always just been basketball for sophomore forward Lauryn Taylor. At a very young age, Taylor adopted her love for basketball from her father who played college and oversees basketball.

“I would be bouncing balls around my house all day, every day since the age of 3,” Taylor said.

Taylor’s father, Rodney Taylor, played for AC Flora High School back in his day and took the offer to play at Villanova University.

Taylor said her father’s love for the game inspired her to want to play too.

Taylor first started playing basketball in sixth grade, and she faced some obstacles, but ultimately she overcame them. Now, she is one of the leading scorers on her team.

Today, Taylor’s ability to shoot three pointers, grab rebounds and dominate the post area makes her unstoppable on the court.

Having joined college basketball during such a sensitive time, Taylor didn’t let that keep her from going hard on the basketball court.

Taylor turned a new leaf in her basketball career when she began attending Spring Valley High School. She went straight to varsity as a freshman and worked her way up to a starting position.

“I wasn’t very good in middle school,” Taylor said. “But I worked hard and made varsity my freshman year in high school.”

In Taylor’s high school career, she went to the playoffs four times. During her sophomore year of high school, her team won the state championship.

“My senior season, everybody on the team was new except for me,” Taylor said. “And we had some struggles, but I was still able to make the senior All-Star team.”

Taylor’s motivation to push her hardest has been one of her former coaches, Teresa Legette.

“Through all of that I had an assistant coach, Coach Teresa Legette, who believed in me through everything,” Taylor said.

During Taylor’s four years in high school, Legette was battling breast cancer and lost the battle in 2020.

Taylor remembers Legette every time she steps on the court and does her best to honor her.

“She is the reason why I keep playing and going hard every time I’m on the court,” Taylor said.

Taylor said her experience as a freshman basketball player has been different and at times overwhelming, but nothing she couldn’t work through.

“My freshman season of college was a new experience for me and it took a lot of hard work, but I managed to learn and grow through the game,” Taylor said.

Taylor hopes that she gets better with every game she plays.

Before leaving college, she also hopes to have all-conference first team at least twice before she graduates. Despite the limited crowd due to COVID-19, Taylor still had the entire support of the FMU audience at her home games.

Taylor’s personality always shines through. Taylor’s selflessness shows through her own personal goals, one of which is to be the best teammate she can be for her team.