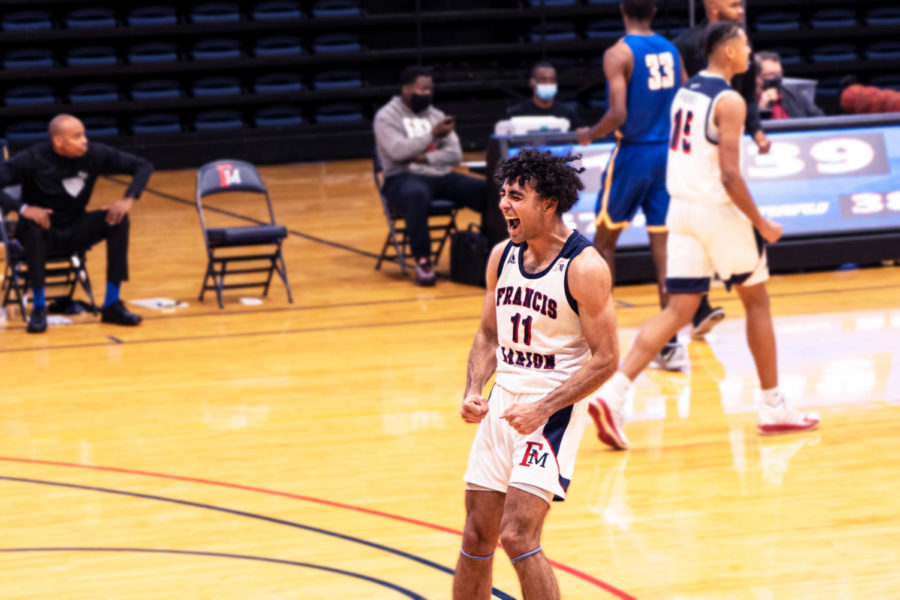 Alex Cox, senior guard and finance and accounting double major, celebrates after scoring a point for the Patriots.

Basketball senior guard and finance and accounting double major Alex Cox has had a successful first few games to start his final season, which he is dedicating to his recently deceased grandfather.

“My grandpa was one of the most important people in my life that I looked up to,” Cox said. “Unfortunately, he passed away due to Covid-19 in early October of this year, but he has always kept me motivated to keep playing.”

Cox’s grandfather saw him achieve great success last season and was able to witness him earn the Patriot’s Most Valuable Player Award for the 2020-2021 year.

“On top of all that, he would randomly send me links of basketball videos he would like me to watch and take notes on, or he would text me to see how I was doing or feeling,” Cox said. “All that he did kept me motivated to keep him proud of me, and I will greatly miss those texts this year, and for however long I keep playing basketball.”

FMU Athletics recently moved from the Peach Belt Conference to the Conference Carolinas, which means all athletes have worked hard to rebuild the university’s reputation. This change brings new opponents, new challenges and new opportunities. During the pre-season rankings, the Patriots basketball team took the eighth spot in the conference. They are hoping for a more successful season this year than last year.

“The goal for the team this year is to win the conference,” Cox said. “That would be the biggest one, and then make a run for a national title. Switching from Peach Belt to Conference Carolinas this year, I think we have a good shot at making some noise in this new conference.”

Cox’s family played a huge role in basketball becoming such a central part of his life, and they have been heavily involved in his career success since he was a toddler. Along with his grandfather, Alex’s grandmother also encouraged him consistently and helped ignite his passion for the game.

“I started playing competitive basketball when I was about two and a half years old, but before that, my grandma bought me a Little Tykes basketball goal that I loved shooting on,” Cox said. “So, I guess you could say my grandma is to thank for me falling in love with basketball.”

In addition to his grandparents, Cox’s father played a major role in realizing his potential and supporting his devotion to the sport.

“One person I would say has been a big contributor to my success in basketball is my father,” Cox said. “He wasn’t one of those dads that made me go to the gym and get shots up. He never pushed sports or basketball on me at a young age; he let me choose what I wanted to do, which I think was one of the best things he could have done.”

After Cox made his decision, however, his father was all in, showing his support by driving him to all of the basketball tournaments that he had in high school, going to the gym to rebound with him, participating in weight workouts and being there through all of the behind the scenes practices and workouts. Cox said his dad did everything he could just to be the best father he could be.

Cox has received high praise in the three games the Patriots have played so far, scoring a career-high of 30 points in their home opener game on Nov. 13, 2021. Cox is currently ranked 22nd in the NCAA DII regular season leaders for points per game, with an average of 24.5 points.