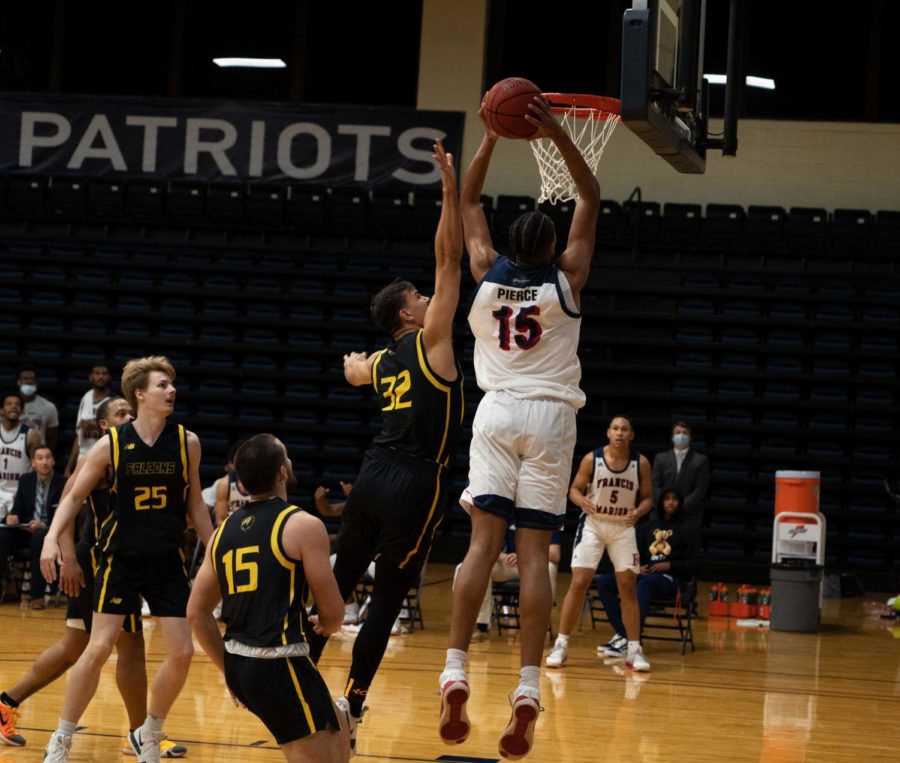 Freshman center, Jonah Pierce, goes up for the dunk against Falcons.

After fighting for a lead during the first half of the game against the Pfeiffer University (PU) Falcons, the FMU Patriots utilized their defense in the second half to secure a win, finishing the game with a score of 94-76 on Wednesday, Nov. 17, at the Smith University Center (UC).

“We moved the ball around a lot more [in the second half],” said Jonah Pierce, freshman center. “And we improved body language by cutting harder and doing everything faster.”

The Falcons’ sophomore forward, Dorian Miles, set the tone early, playing aggressively once he stepped on the court. The Patriots had a bit of a sluggish start but adjusted quickly to PU’s defense. They sped up the pace of the game and made the opposition adjust to their tempo.

“We started taking pride in individual defense and communicating more to ensure he [Miles] was always accounted for, as well as the outside shooters,” Pierce said.

After working to catch up and with 10 minutes left in the first half, freshman guard Farid SaintCyr Jr. had a timely steal that led to a fast-break layup to close the score to a one-point margin. Graduate transfer and center Neija Jordan was right behind SaintCyr with a post fadeaway from the left corner, putting the Patriots ahead, where they would stay for the remainder of the game.

To further their lead, Jordan and Tionne Rollins, junior guard and forward, continued playing tight defense, totaling four steals throughout the night, which helped the Patriots build a 33-point lead with five minutes left in the first half.

During the second half of the game, FMU’s defense locked in on Miles. After scoring 18 points during the first half, the Patriots made adjustments to trap him when he got in the paint. As a result of FMU focusing on Miles, PU’s offense stalled. They took several early shot-clock jumps due to the clogged paint, allowing FMU to capitalize on every mistake they made.

After halftime, Pierce stepped up and led his team to a strong finish. With a little less than six minutes left in regulation, he came in with a well-executed alley-oop and continued with multiple successful defensive plays down the stretch. His high activity resulted in a lot of seemingly easy baskets and continued momentum for the Patriots as they used his performance to build an 18-point lead early in the final half.

“Pierce was blocking everything for the Patriots,” said Typril Simon, junior healthcare administration major. “He was a key component to the Patriots’ strong finish.”

“We [FMU] started slow, but our defense and intensity allowed us to catch up,” said Darian McDaniel, sophomore finance and supply chain management double major. “This was a strong team win for the Patriots.”