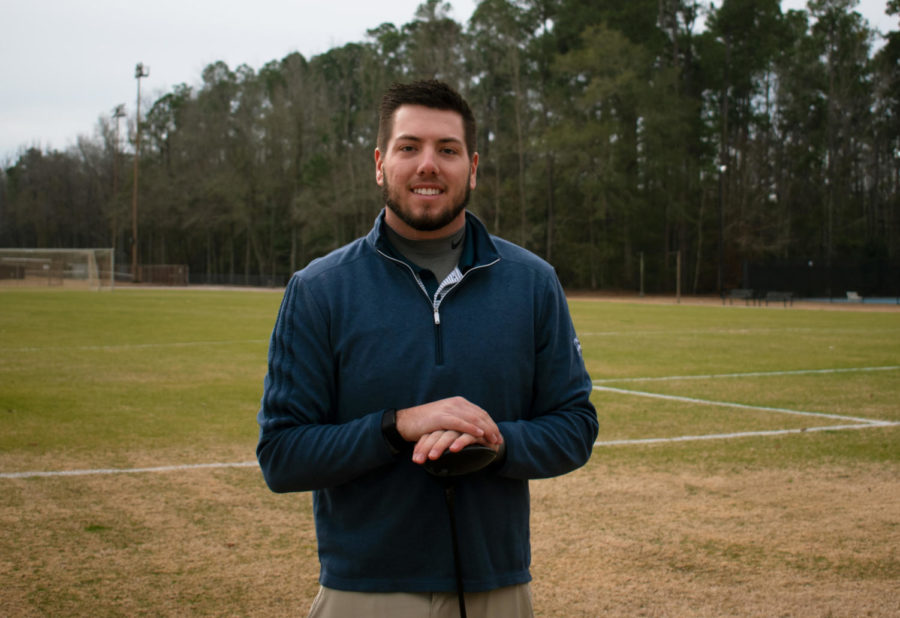 From a young age, Michael Thompson became interested in golf when he saw others were not.

Michael “McClure” Thompson, a senior marketing major and native of Little River, South Carolina, is excited for the upcoming golf season—especially since it may be his last as an undergraduate at FMU.

“[Redshirting] allowed me to space out my classes to where I wasn’t slammed like others,” Thompson said. “Our coach doesn’t really have practice; golf isn’t a team game. It’s an individual game, and some improve better by themselves, so we have as much time as we need. We just have to manage it in the right way.”

Since FMU does not have a golf course, the team frequently practices at the Florence Country Club.

Although it is a D1 sport at FMU, the golf team is not affiliated with a conference and is considered independent. In effect, this means the team cannot go on to nationals, regardless of how well they perform. However, this could all change soon. FMU’s Men’s Golf team was invited to join the Southland Conference, which could be a big step for the program, providing the opportunity to compete at a national level.

Thompson started playing golf at the age of seven. He said he was interested in the sport because everyone else seemed to lack interest in it. There was no true motivation for playing other than novelty, possessing not so much as a lone golf-playing relative.

“I wouldn’t say one particular person got me into golf,” Thompson said. “I was naturally not as gifted as others, but I could keep up for my age.”

Despite this difference in skill, Thomspon was determined to get better. His goals did not necessarily include collegiate play when he began playing, but his hard training sent him there in the end.

“It wasn’t until I started getting beat every day by the guys on the high school team,” Thompson said. “I really hate losing, and this just pushed me harder to beat those older guys,”

Thompson plans to continue improving his skills as he heads into the season, with big dreams and hard work at the forefront of his mind.

“Well, this season is big for us. We have been invited into a conference for the first time in 20 years,” Thompson said. “Might not seem big to most, but that is our shot at making it to regionals and nationals. We really have a strong team, and I’m excited to see what kind of noise we can make. For myself, I want to win an event and average under par for the spring.”

Like most athletes, Thompson’s drive comes from his “why.” He has two important people in his life he plays hard for and attributes all of his success to them.

“I look up to my mom and dad,” Thompson said. “They both didn’t come from much, and now they have built a successful business. They have given me almost every opportunity growing up to make something of myself, and I couldn’t thank them enough. If it weren’t for them, I surely wouldn’t be doing what I’m doing.”

FMU’s golf team concluded their fall season in late November at the Daniel Island Club, finishing 10th out of 20. Patriots can catch Thompson and the Men’s Golf Team at the tee on Feb. 21, when they compete against Wexford Plantation Intercollegiate at Wexford Plantation.