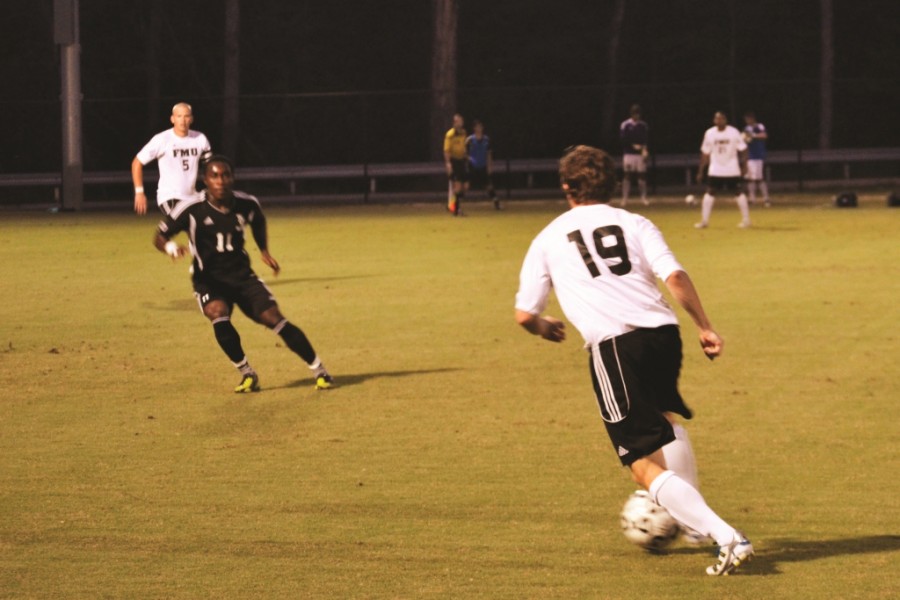 If you attended the Saturday, Sept. 6 soccer match between the Young Harris College Mountain Lions and the FMU’s Patriots men’s soccer team and saw the physicality and the emotion on Hartzler Field, you would be flabbergasted to discover that it was the first all-time meeting between the two Peach Belt Conference foes.

It was a match filled with controversial yellow cards, pushing, shoving, flopping and great intensity. After 90 minutes of regulation and two overtime sessions, the Lions and the Patriots battled to a 2-2 tie.

“We played a good 110 minutes,” Campbell said. “Our maturity is coming and we’re taking steps in the right direction.”

At the end of the night, the story of the match may have been the officiating.

The referees called a total of 39 fouls, nine yellow cards and one red card. Players from both teams showed frustration over many of the referees calls.

Campbell said that the officiating did cause some confusion for much of the match.

“I don’t think anyone knew what was a card and what wasn’t,” Campbell said. “But in situations like that, we have just got to control what we can handle.”

Junior forward/midfielder Cody Farrier gave FMU a quick 1-0 advantage in the fourth minute when he took a pass from freshman midfielder Pascal Magiera and chipped the ball over the outstretched arms of Young Harris senior goalkeeper Wezly Barnard.

The Mountain Lions scored the next pair of goals in the first half to take a 2-1 advantage. Senior defenseman Ashley Walker assisted freshman defenseman Jonas Sturesson, who scored on a 12-yard shot to the right post at the 19:43 mark.

But it wouldn’t take the Patriots long to respond. Just 2:19 later, FMU tied the match at 2 thanks to a header by six-foot, five-inch junior defenseman Simon Nett after junior midfielder Henrique Guitti served the ball into the box.

The second half and the two overtimes were full of breathtaking moments but no goals.

In the 79th minute, Farrier came close to sneaking one past Barnard, but couldn’t pull through with the goal.

Four minutes later, Young Harris junior midfielder and leading scorer Niall McCabe tried to elude FMU sophomore goalkeeper Logan Fisher in the left side of the box, but his shot went just outside the right post, to the delight of a breathless FMU crowd.

But the crowd was really sent into frenzy four minutes later when McCabe was ejected from the match after receiving his second yellow card, the latter card for time wasting.

The Patriots played the rest of the match with a man advantage.

Campbell said that when McCabe was ejected, Young Harris really stepped up their play.

“Young Harris became more defensive during the man advantage,” he said. “Sometimes a man down doesn’t make a huge difference.”

Each team recorded one shot in each of the overtime periods. FMU’s best opportunity came with 1:18 remaining when junior forward Alex Blandin obtained possession in the defensive half of the field, dribbled 50 yards downfield and outraced the Young Harris defenders. Unfortunately for the Patriots, his attempt would sail just a little high.

Young Harris freshman midfielder Kyle Ball registered the only shot-on-goal in overtime with 14 seconds remaining, but Fisher came up with the save.

Campbell had positive things to say about Fisher who, in only his second career start, compiled eight saves, while Barnard had four stops for the Lions.

The Mountain Lions led in shots 22-13 and held an 11-4 advantage in corner kicks.

After the draw, it became quite clear that FMU may have found a new rival in Young Harris College.