Pats take bite out of Bulldogs on Senior Night 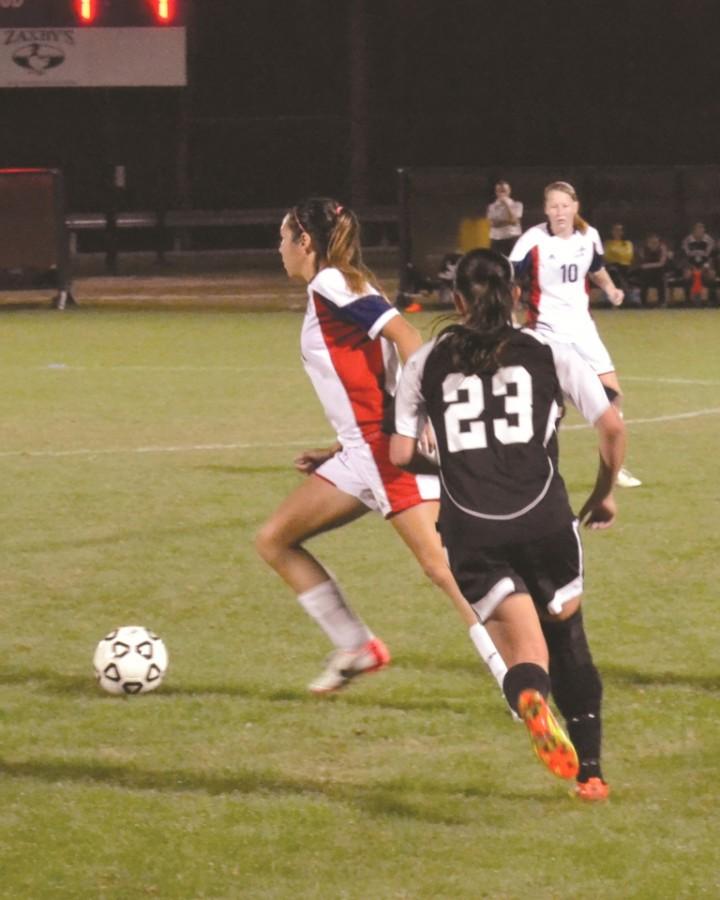 The FMU women’s soccer team sent its two seniors out in style on Wednesday, Oct. 24, with a 3-0 blowout victory against South Carolina State University (SCSU).

The victory was dedicated to senior midfielder Kelly Kady and senior defenseman/forward Rebeccah Hoekstra, who both celebrated their last home match at FMU.

Kady, a four-year letterwinner, has scored ten goals in her career, while Hoekstra has started each of her four years, including starting 54 straight matches to end her career.

An emotional Hoekstra said that the start of the match was difficult for her.

“At the beginning of the match, it was hitting me hard that this was my last home match,” Hoekstra said. “But then I realized that I have a whole Spring semester with my girls.”

The Patriots gave the huge Hartzler Field crowd much to cheer about in the early minutes of the match, when junior midfielder Jordan Allen nailed a five-yard header off a service from sophomore midfielder/defenseman Brittney Smith to give the Pats a quick 1-0 advantage.

FMU’s lead swelled to 2-0 just after halftime when sophomore forward Dominique Evans gathered a loose ball and knocked home a five-yard shot at the 46:12 mark. The sequence began with a corner kick by sophomore defenseman Sandy Odembo.

The Evans goal sent the Sea of Red crowd into hysteria. Both Hoekstra, as well as FMU Head Coach Frank Pitt, said that the crowd was a huge help in FMU’s dominating performance.

“The team fed off the crowd a lot,” Pitt said. “Having energy like that can help you pull though.”

Hoekstra agreed with her coach.

“The crowd helped,” she said. “They gave us adrenaline.”

There were two moments that stood out over all the rest in the match. In the second half, Kady nearly scored on a cross, while Hoekstra actually did score, but the goal was waved off when a Patriot was called for a foul in the six-yard box on a corner kick.

The crowd leaped to its feet on both occasions before sitting down in disappointment when Kady missed her shot and when Hoekstra’s goal was waved off.

FMU junior midfielder Yasmin Bunter tallied her team-leading seventh goal at 85:02 to conclude the scoring. After collecting a loose ball in the Bulldog defensive end, she booted a blazing 17-yard shot past SCSU goalkeeper Haley Austin.

Pitt seemed pleased with every aspect of his team’s play in the match.

“It was important for us to play smart and not be overcome with emotion,” Pitt said. “I wanted us to play a team game and be organized defensively. We had our hard challenges but we kept our cool.”

The loss dropped SCSU to an end-of-the-season record of 7-11-0. Austin recorded six saves for the Bulldogs.

FMU outshot the Bulldogs 16-9, but only three of the SCSU offerings were from within the penalty area. SCSU did not get good looks at a goal all evening, resulting in easy saves for O’Berry.

FMU finished the season with a record of 7-9-1, the highest win total since 2007. The Patriots also ended the year with an unblemished 6-0-0 mark at new Hartzler Field, the team’s first unbeaten home slate since 2007 and only the fourth in program history.

Pitt said that being undefeated at home gave him a “great feeling” and that he was glad the new field did not intimidate his squad.

After the victory, the crowd let out one last roar for FMU’s two seniors, Kelly Kady and Rebeccah Hoekstra, celebrating them for their contributions to FMU women’s soccer.