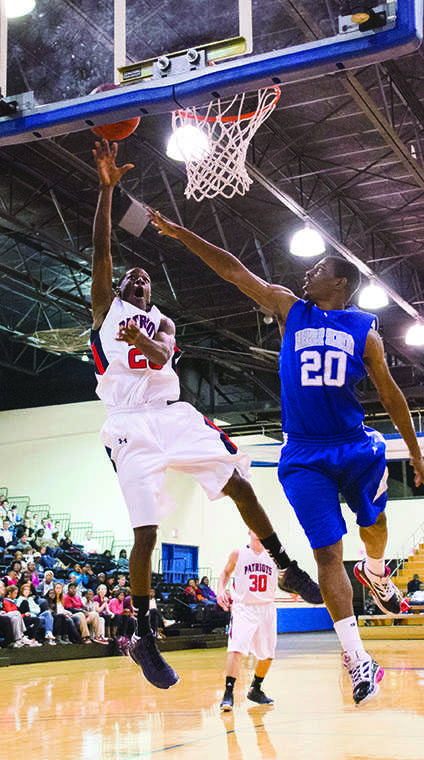 On the night of the annual Riot at the Rim, junior guard Evrik Gary cashed in 22 points to lead seven players in double figures as Francis Marion’s men basketball team blasted past Barber-Scotia College in a record-setting 150-76 non-conference win Tuesday night (Nov. 27) at the Smith University Center.

Every year, FMU’s basketball teams hold Riot at the Rim to excite and energize fans about the basketball season. Pregame activities for this year’s Riot included giveaways, cheerleaders, a student organization fair, the FMU Dance Marathon and an on-site remote broadcast by Chris Burgin and the Pee Dee SportsCenter on local station 100.1 FM The FAN.

The Patriots put on a much appreciated show after the scheduled Riot at the Rim doubleheader turned into a single game when the Barber-Scotia women’s team was a no show for the 5:30 p.m. game with the Lady Patriots. Though the Lady Patriots hosted an inter-team scrimmage, fans were still disappointed that they were not able to see the Lady Patriots take on a true opponent.

Meanwhile, the Patriot men set numerous records in the big win over the Sabers, including records for: points scored (150), points in a half (77), field goals made and attempted (55 of 119), three-pointers made and attempted (21 of 54), steals (32), forced turnovers (56) and margin of victory (74). FMU also tied the school record for assists in a game with 34. Most of the records were already broken in the season-opening 147-138 victory over Morris College. In addition to the school marks, FMU also set conference records for points scored and steals.

Head coach Gary Edwards said that this team would be a high-scoring club and would aim to score over 100 points in every contest.

“We expect to score in the hundreds every contest,” Edwards said.  “We want to force turnovers, get out into transition,get layups and take threes.”

The Patriots have scored over 100 on several occasions this year.

During the victory, EvrikGary, who scored the team high, crossedthe 800-point mark for his career. He also snagged a team-high nine rebounds while dishing out five assists in only 20 minutes of action. Freshman guard Cameron Lee came off the Patriot bench to score a career-high 19 points after struggling in his first three contests. Sophomore Dustin Jones scored 17, freshman Storm Clonchhad 15, junior MarkcusFalleyknocked home 13 and juniors Nequan Melvin and Chris Rhodes scored 12 apiece.Senior Mi’Kyel Nero played the rogue on the evening with seven steals, coming to within one of the school record. Both Rhodes and sophomore guard Clayton Williams each recorded eight assists.

Rhodes, who has been a quiet, yet steady producer for this Patriot team all season,expressed a team-first mentality when speaking on his performance.

“I just want to put my guys in the right spots and make it easy for them to score,” Rhodes said.

Rather than focusing on points or assists he had tallied, Rhodes was most concerned with how many turnovers he had committed in the game. Committing fewer turnovers has become a hallmark for the Patriots thus far this campaign.

FMU scored 63 points off 56 Saber turnovers.Once FMU took the early 4-2 lead off a Rhodes jumper, they never looked back. The Patriotswent on a 17-2 run over five minutes early in the first half to blow open an 18-point lead.The Patriots finished the final six minutes of the half with a 35-8 run to grab a monstrous 77-31 lead at halftime. Barber-Scotia never got any closer the rest of the game.

The victory improved FMU’s record to 3-1 at the time. FMU now finds itself in the meat of its Peach Belt Conference schedule.