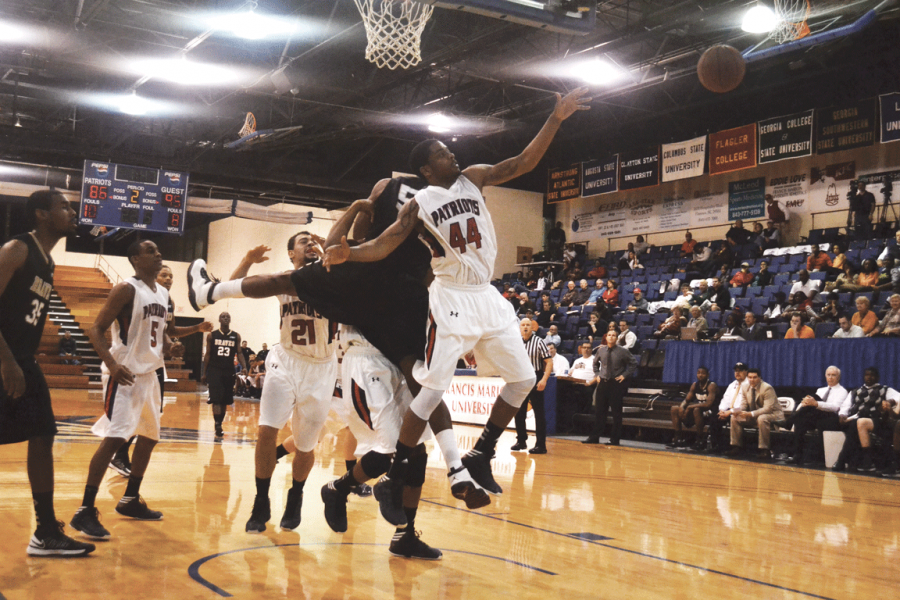 A night that began in celebration for Francis Marion University (FMU) senior guard/forward Mi’kyel Nero ended in anguish for both him and the FMU men’s basketball team on Wednesday, Feb. 27, as the UNC Pembroke (UNCP) Braves defeated the Patriots, 101-95.

Nero, the lone senior on the squad, was honored before the game and nailed an early three-pointer from the top-of-the-keyto trim UNCP’s lead to 6-5. But moments later, Nero fell and injured his left wrist while attempting to block a UNCP layup.

Rhodes said Nero’s importance to the team was felt both on and off the court all season.

“Mi’kyel is more than just a teammate,” Rhodes said. “He is a big brother. He helped you out not just in basketball but in life.”

Rhodes also said Nero being out of the game changed the Patriots’ game plan against an athletic and physical UNCP team.

“Mike was a big part of the game plan,” Rhodes said. “We had planned to spread the floor and let Mike take the ball on UNCP’s big men.”

FMU Assistant Coach Sean Sweeney said he knows firsthand how difficult a journey it has been for Nero, who returned this year after suffering a season-ending ACL injury early last season.

“Mi’kyel showed a lot of resolve coming back from tearing his ACL last year,” Sweeney said. “I think it took him a while to get comfortable again. I’ve had an ACL injury before and I think it’s more trusting your knee to get going. He’d been a steady force for us.”

The Braves led for almost the entire first half, establishing a lead as large as 10 after a layup by Florence native and UNCP guard Shahmel Brackett.

UNCP increased its lead to 89-75 with 4:04 remaining in the game after a layup by guard Quamain Rose.

But the Patriots would charge back into the game with a fierce surge, scoring the game’s next seven points to slice the lead in half.

The last ninety seconds of the game were full of excitement and emotion. With UNCP up 96-92, junior guard/forward Dustin Jones, who scored 27 points in the game, swished one of his seven three point shots while falling to the floor to cut the FMU deficit to one, causing pandemonium at the Smith University Center.

Rhodes said Jones, who had been struggling the last few games, is a pure shooter and has been a valuable asset to the club.

“Dustin has been in a slump lately but he works hard and is a threat at all times,” Rhodes said.

But in a play that in many ways summarizes the Patriots’ up-and-down season, Jones would come down the floor with 17 seconds remaining and UNCP up 98-95 and be called for a traveling violation, FMU’s 22nd turnover.

Sweeney said the turnovers were uncharacteristic and that his guys were trying too hard offensively.