Office Services progresses: Project scheduled for completion in the spring 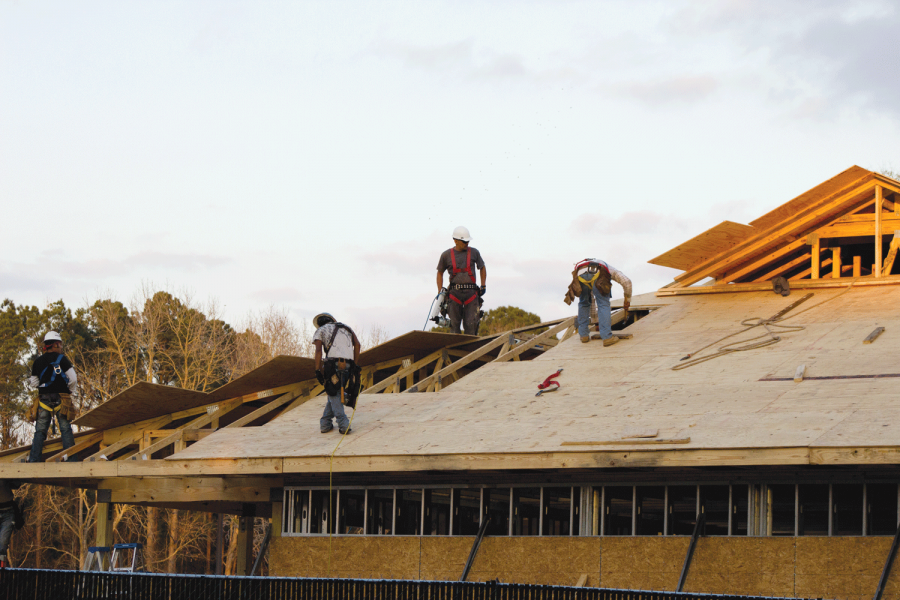 When returning Francis Marion University (FMU) students and staff begin the fall 2013 semester, the new office building located between the Fine Arts Center (FAC) and the Academic Computer Center (ACC) will be fully operational. The new building will be used for all of FMU’s printing and mailing services.

FMU senior staff gave the go ahead for construction workers to break ground for the new office building project in October 2012.

According to Director of Facilities Support Theresa Cook, FMU has hired Chancel Builders, Inc., a family-owned building company based in Conway, to complete the office building project. Anyone passing by can see the building features taking shape; the walls, steel studs, roof and front porch have already been erected.

Vice President for Business Affairs John Kispert said the move-in period for the administrative office will be within the first two weeks of May.

Mitchel Ward is the general contractor on site and oversees all workers, supply orders, adherence to building specifications and hiring subcontractors. Ward confirmed that the project is running on schedule and is being built according to the blueprints rendered by Collins & Almers Architecture, LLC.

Kispert said that the Capital Maintenance Reserve Account will supply the $710,000 budget for the project. The funds are accumulated over time from a percentage of every student’s fees, which are based on how many credit hours the student takes. The account is reserved for campus maintenance fees and facility buildings. FMU President Dr. Fred Carter and other senior staff decide how to the funds are used for the upkeep of the campus and its buildings.

To ensure that the funds are used properly, the group assesses each project individually by cost, priority, usefulness and its effect on FMU students and faculty.

Both Kispert and Bridges confirmed that the building will be demolished once the new one is constructed. They said it will be less expensive to build a new building for these services than to do any renovations to the pods. Bridges commented on the state of the building currently in use.

“The old building has had several uses over the past 40 years,” says Bridges. “It is beyond help, not laid out well, and would need expensive repairs to remain viable.”

The current office buildings, referred to as the “grey pods,” are the oldest buildings on campus. The exterior siding is deteriorating and falling apart near the bottom edges, and the door has multiple holes in it. There is also water damage in the ceiling, and many of the walls are stacked with boxes that nearly reach the ceiling.

Bridges explained that the architects designed the new office building with more open space in order to adapt to technological changes and future operations.  The interior layout will be more organized, more conveniently placed and more efficient. According to Bridges, these measures will ensure better customer service and better staff productivity.

Because energy-efficient buildings save money over time, Kispert emphasized the importance of taking all green ideas into account when planning any renovation or new building project. Cook said some of the appliances that will be installed in the building leave less of a footprint on the environment and save utility costs.

In addition, the building’s heating and air conditioning system will be connected to the existing campus-wide building management system. The system is used to monitor and set up occupancy schedules in order to better control energy use in the new office building.