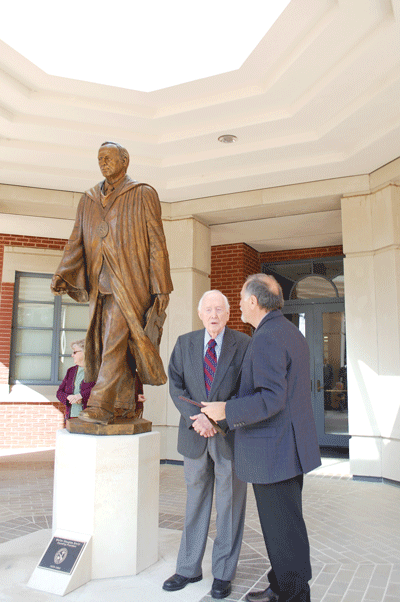 Smith, 92, gave thanks to a crowd of 150 people before the black cloth was stripped away and the statue  was revealed to the public for the very first time.

Alex Palkovich, a local sculptor, was commissioned to create the statue. According to Palkovich, a smaller version of the statue is located at the Art Trail Gallery in downtown Florence.

Smith said he was pleased that Palkovich was the artist chosen to sculpt the statue.

“When you celebrate art, you celebrate the artist,” Smith said. “ Alexander Palkovich is one of Florence’s finest treasures. Not only is Palkovich a talented sculpture, Alex is also an aspiring teacher who can bring the artistic talents from people of all ages.”

According to current president, Dr. Fred Carter, the discussion to create the statue started about a decade ago.

When asked by students why the university was honoring Smith, Carter said many presidents in the years ahead will serve the institution, but there is only one founding president.

Although FMU was not established until 1970, the effort to create a college in Florence began 14 years prior.  The University of South Carolina opened a branch in Florence with classes held at the Florence Library on Irby Street.

Smith was serving as president of Salisbury State College in Maryland when he was chosen as the first president of FMU in October of 1969. In 1970, a ceremony was held to make Francis Marion College the newest state college of the 20th century.

Smith told the crowd how he shared his vision for the future of FMU many years ago standing almost in that very same spot.

“As we looked out at the land where all of the pine trees were sitting…we imagined brand new buildings, sidewalks, streets and playing fields.” Smith said. “This was in 1970, but today we see that those dreams became a reality.”

As Smith looked at the crowd, he acknowledged those who helped him establish the university and said he was proud of progress that has been made since his presidency.