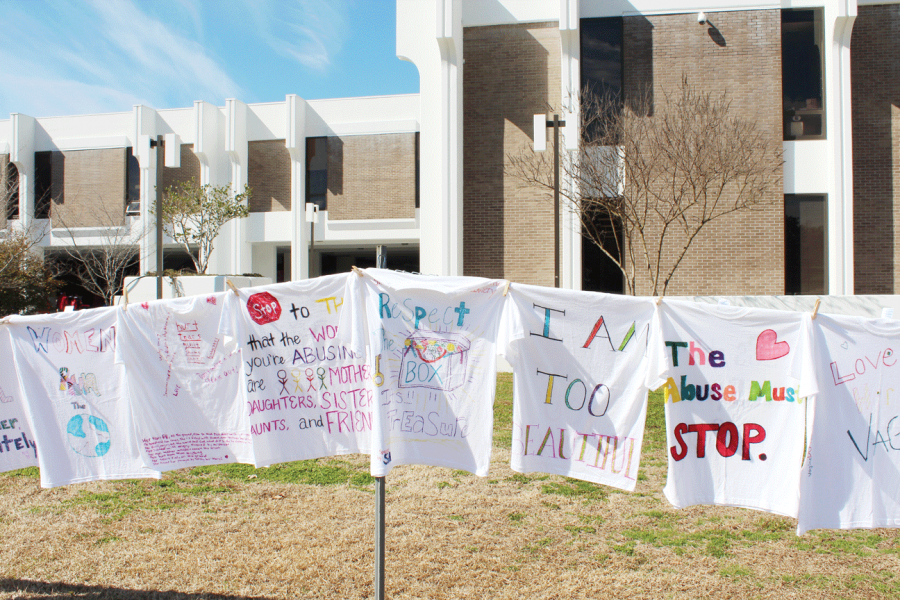 Francis Marion Unversity (FMU) held its annual V-Week events from Monday Feb. 25 to Saturday March 2 to raise awareness, education and money for women who have been affected by domestic violence and sexual abuse. This year’s theme for V-Week was “Be the Power.”

Instructor of English Lisa Stuchell said the proceeds from this year’s events raised around $3,500 for the Pee Dee Coalition Against Domestic Violence and Sexual Assault during this year’s V-Week events.

“All of the events were very successful this year and we had a great turnout,” Stuchell said.

There were many events held each day during V-Week.

Penny Wars was brought back for this year’s V-Week. Professor of English Will Duffy, professor of history, Chris Kennedy and Associate professor of biology Greg Pryor all took part in this year’s Penny Wars. Each professor’s name was attached to a jar and for three days students, faculty and staff placed money in the professors’ jars. The professor with the most money at the end of the three days was the winner.

Duffy was this year’s winner of the Penny Wars. As the winner, Duffy dressed up in a dress all day on Thursday. He also attended The Vagina Monologues that night as a special guest wearing a black evening gown.

Penny wars raised $83.77 which was donated to the charity.

There were two performances of The Vagina Monologues, an award-winning play this year. The Vagina Monologues is based on V-Day founder Eve Ensler’s interviews with over 200 women. Nine FMU students presented the monologues. The show celebrated women’s sexuality and strength.

Junior nursing major Kristen Nalley, was in attendance and said she had a great time at the show and was happy to hear that the money raised by the ticket sales was going to such a great cause. She also said that the monologues were really eye opening.

“I really enjoyed the show,” Nalley said. “It was entertaining and empowering.”

During the monologues, the One Billion Rising Campaign was presented by Associate Professor of Theatre, Dawn Larsen. The campaign was asks one billion women to stand up and demand an end to violence. Activists in 182 countries have already committed to take action.

Following the monologues was the MADWOMAN fashion show. The model’s outfits were original pieces created by FMU students. The fashion show focused on how women go through different processes to fit society’s standards.

Another event was “Any One of Us,” a women’s health event Nurse Practiotioner, Tracy Aniello of theFMU Student Health Center and other nursing professors. “Any One of Us” took place in the Lee Nursing Building. Information was provided on a number of V-Day-related topics, such as rape, bullying and post traumatic stress disorder.

Representatives from the Pee Dee Coalition attended the event to provide information on their services. There were free condoms given out and door prizes.

Stuchell said that there was a great turnout for this event.

The Clothesline Project took place all week on the Founders Hall lawn from 10 a.m. to 3 p.m. The event provided women affected by domestic violence or sexual assault with a chance to express their emotions by decorating a shirt. After the shirts were decorated, they were hung on a clothesline.

T-Shirts and chocolate vaginas were on sale throughout V-Week. Stuchell said all proceeds from the sales, as well as ticket sales and Penny Wars, went to the Pee Dee Coalition.