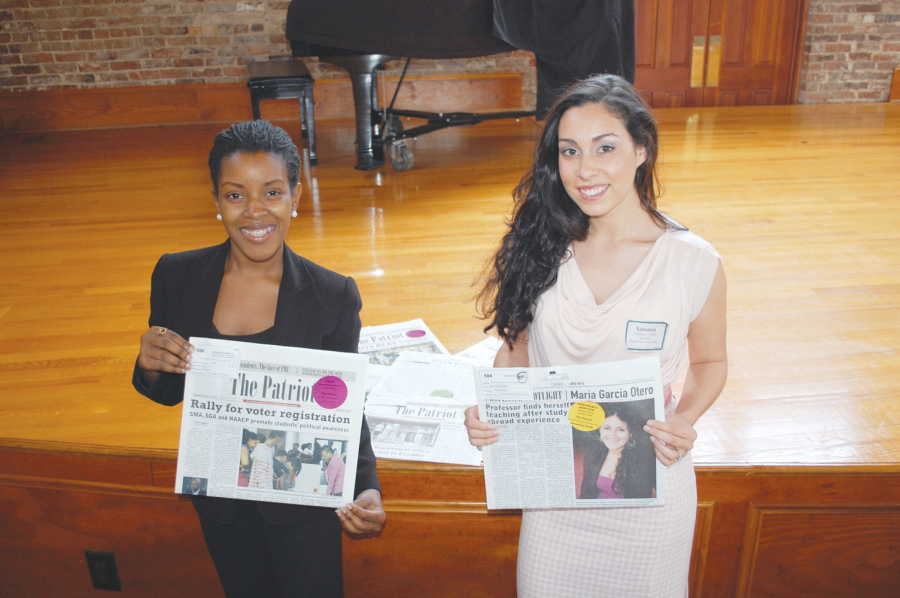 The Patriot staff ended their year in victory as they returned to Francis Marion University with 9 awards from the South Carolina Press Association (SCPA) Collegiate Meeting and Awards Presentation. The conference was held Friday, April 12 at Claflin University in Orangeburg.

David Sacash, newspaper advisor and associate professor of Mass Communication, said that the Patriot staff set their expectations high at the beginning of the year.

“Winning 9 awards, including first place for general excellence, was one of the goals for the student newspaper this year,” said Sacash.

Sacash, who will be leaving FMU at the end of the semester, has been the advisor for the newspaper for the last years 10 years. He said that helping the students reach their potential has been the highlight of his career at FMU.  Sacash also said he enjoyed seeing the quality of the student newspaper improve each year.

“The newspaper is now full color and it has its own web page,” Sacash said. “I’m very proud of the staff. The writers are professional and dedicated students.”

“Wilson worked very hard this year to make sure the Patriot lived up to its high standards,” Sacash said. “She would come in on the weekends to make sure the paper and layout were done in a professional manner. The entire staff gets credit for another great year, especially the layout and copy editors.”

Wilson, a senior who is completing a double major in mass communication and Spanish, joined the Patriot in 2011 and has been the editor in chief for the past year.  Wilson said that she is really excited to see the dedication of the staff members rewarded.

“We are here all weekend for layouts; Wednesday, Thursday and Friday nights and all day on Saturday,” Wilson said. “I feel that we definitely worked hard for the awards and it’s nice to see that all the hard work paid off.”

According to Wilson, this is her last year with the Patriot as she will be graduating in May.  Wilson said that she will miss working with the staff and seeing the newspaper’s progress.

“We had a brand new team this year, so we had to learn how to work together,” Wilson said. “I have seen real improvement, even within the last semester.  I feel like once you see improvement you care more and you really cannot go back.”

The nine awards won by the Patriot include honorable mentions in the Feature Story category by Wilson and in News Story by Melissa Rollins.  Third place was awarded to Rachel Baggett in the Arts & Entertainment Story category and to David Doughty in Humorous Illustration or Cartoon.  Darby Sauls won third place in Single Advertisement and second place in Page One Design.  Second place was awarded to Brooke Rogers in Humorous Illustration or Cartoon.  Armand Broady won first place in the Sports Story category.  The Patriot also won first place in the category of General Excellence.