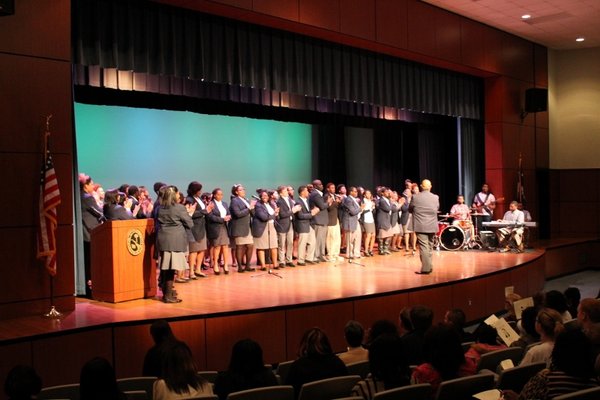 The celebration began at 6:30 p.m. in the Chapman Auditorium with Teresa Johnson Ramey, vice president for student affairs and dean of students, hosted the evening’s event.

The celebration began with the audience standing up and what is sometimes known as the black national anthem, “Lift Every Voice and Sing.”  The songs continued next when the Young Gifted and Blessed Gospel Choir (YGB) came before the audience and sang two additional selections. Afterwards, Dr. Fred Carter, president of the university and professor of political science, introduced the speaker of the evening, Representative Gilda Cobb-Hunter.

Cobb-Hunter has not let the glass ceiling stop her achievements or take away from her dedication to people. She was the first African American women to be elected to a state wide office in the Orangeburg County, the first person of color to lead a legislative caucus and the first senate freshman appointed to the House Ways and Means Committee.

Currently, she stands as the executive director of CASA/Family systems and is a member of the Democratic National Committee’s (DNC) executive committee.

In an interview for the Southeastern Institute for Women in Politics, Cobb-Hunter considered herselfto be a consensus builder and defined her leadership style as one that shares power and brings others to the table.

During her speech at the Martin Luther King Jr. celebration, Cobb-Hunter focused on the program’s theme, “Celebrating the Legacy, Living the Dream” and challenges of social inequality in society today.

Toward the end of her speech, she turned her attention to the younger members in the audience and stated thatbecause we live in a global society, we must stop hating and accept differences.  She expressed a belief that we have to start speaking out and making a difference.

“Representative Gilda Cobb-Hunter is known for dynamic speaking ability,” Dr. Carter-McCants said.“In her presentation at the event, she informed the audience that she would ‘keep it real,’ and she did just that [while] inspiring and empowering the audience to make a positive impact in their respective communities.”

Following the evening’s event, a reception was held in the Lee Nursing Building (LNB) where refreshments were offered to all who attended.